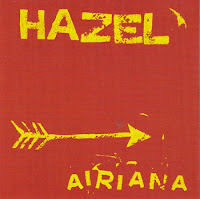 Remember the '90s?  Yep, you sure do. Remember the unremitting hotbed of musical exports that came roaring out of Seattle, Olympia, and Aberdeen?  Yep, you sure do.  Yet buried beneath all the Emerald City headlines was yet another thriving clutch of musical talent being born and bred roughly four hours due south.  Heatmiser, Crackerbash, Pond, Sprinkler, and the band in question, Hazel, were all denizens of Portland, Oregon during the grunge epoch.  In retrospect, most of the aforementioned were a bit more docile than their neighbors to the north, but moreover they crafted music that was equally as substantive.  Hazel were a co-ed quartet who prior to this ep  were taken under the wing of Sub Pop for two albums, 1993's bitchin' Toreador of Love, and the decent but pales-by-comparison follow-up Are You Going to Eat That? in '95.  By the time of that second album, my understanding is that Hazel were phoning it in, but for a band who's heart wasn't in it, the Airiana ep, released two years later, finds the crunchy, indie-guitar troupe firing on all cylinders, cranking away with oodles of punky bravado. The band's ever comely percussionist/mouthpiece Jody Bleyle, had an increased vocal presence on Airiana than on the preceding albums, and helped to chart Hazel on a revitalized course - one that was unfortunately and apparently no longer pursued after this ep.  Bleyle went onto the post-riot grrrl outfit Team Dresch, while frontman Pete Krebs pursued solo activities.

I love Hazel. I'm glad I got to see them four times when they were around. Amazing shows even if no one seemed to show up.

Thanks for sharing their recorded swan song. Hazel was also known for featuring a guy who danced -- Fred Nemo -- that was all he did. I think the Happy Mondays also pulled that off. Pete Krebs has had a very successful career as a musician in a variety of Portland combos, and solo, since Hazel split up.

Hi! Do you have their "Wintogreen" and "J Hell" 7 inches or their song "Shag Rug"? I'm looking for them desperately!

Great post about an terrific unsung band. one of my favorites.

I'm also looking for "wintogreen" what an amazing song to be lost to the internets.