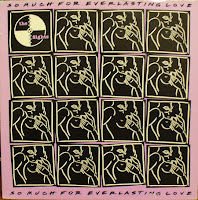 The Sights were yet another L.A. power pop-leaning combo that never quite grasped their proverbial fifteen minutes of fame, though I hope the video for the winsome title track (see below) with all it's requisite, early '80s maneuvers made it into MTV's early morning rotation for at least a week or two.  Ah yes, the decade that keeps on giving a full generation after the fact.  In all sincerity, "So Much..." is a really commendable song, easily an 8 out of 10 or better.  Ranking just a notch down, "Lead Me Down" resembles a looser Plimsouls with some tasteful sax thrown in.  The remaining numbers aren't quite as indelible, but not the least beat embarrassing either.  We Want to Please You blog has dedicated some laudatory and thoughtful text regarding this record, and I believe may still be hosting the most renown track from it, but here's the whole shebang ripped by yours truly.

Thank you very much for all. Fantastic.