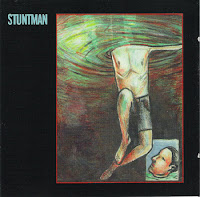 Ever wonder what happened to the other members of the Treepeople when Doug Martsch made his departure for greener pastures in Built to Spill, circa '93?  Didn't think so, but I'll fill you in anyway.  His replacement in Treepeople was John Polle, who happened to possess some of Doug's lovingly whiny timbre, but not so much his off-the-cuff misanthropy that made him the endearing force in BTS.  The last album under the Treepeople banner was Actual Re-Enactment, issued on C/Z Records in 1994, but it bore little of the charm and substance of Martsch-era essentials, Something Vicious For Tomorrow and Guilt, Regret, Embarrassment.


Enter 1995 and the era of Stuntman, who's nucleus was comprised of John Polle and original Treepeep's guitarist Scott Schmaljohn.  A new rhythm section featuring Sean M. Lennon on bass and Mike Rundle on percussion fleshed out the quartet, but despite the revamped lineup, Stuntman retained much of Treepeople's dissonant and noisenik constructs, due in part to Schmaljohn's pronounced, noodly fretwork.  Their debut found the group taking a page from Archers of Loaf sonic template, and ultimately Stuntman successfully incorporated some of those more tangential facets thereof into the busy framework that longtime Treepeople enthusiasts are likely to recognize here - albeit conveyed via a different mouthpiece.

Stuntman released their second album, The American Fadeout in 1997 on Mag Wheel Records.

Loved Treepeople but never heard Stuntman, so I might have to check this out.

Do you have their second album as well? This is really good.

Would love to check this one out. Could you please re-up?

Any chance of a re-up if possible?

Also, do you have Treepeople's Actual Re-Enactment?

Thank you so much. Great blog!

Any chance of re-up?