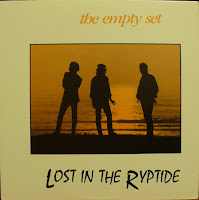 There's probably not much I can tell you about this long defunct Michigan trio that hasn't been extolled upon on their archival website.  The Empty Set's left-of-the-dial pop/rock was competent and occasionally ironic, but with the exception of Lost in the Ryptide's most stimulatinmg offerings like "Ryptide Zone" and "Sing Song Babble On," they were a bit non-descript.  Though their cover of the Comsat Angel's icy and enthralling 1980 single "Independence Day" hardly outdoes the original, it's inclusion here is a greatly appreciated gesture.

Even the briefest listen to my rip of this album will reveal a copious amount of vinyl noise, that at times is damn near interrupting.  It appears that Empty Set frontman Lawrence Bond has a few remaining copies of Lost... he's hawking through the band's site (linked above), so if you enjoy what you hear, consider patronizing him for what might very well be an improved listening experience.

Would like a reupload of this if I can. Thanks!