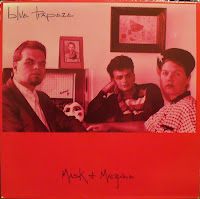 What little I've been able to glean about this jangly Fullerton, CA trio are a number of references indicating that Blue Trapeze were lumped into the Christian rock realm, though you'd be hard pressed to make that case upon listening to the vast majority of this 1986 ep.  Mask & Marquee reveals itself as a rather secular record, wherein the group seems way more intent on churning out vaguely noir alt-rock, summoning inspiration not from the heavens, but instead the likes of Peter Buck, and arguably some of the darker Paisley Underground champions of the era (e.g. Rain Parade).  The sum total of Mask & Marquee falls slightly short of a revelation (no pun intended), but nonetheless it's evocative of the melancholic, yet fertile left-of-the-dial environment of its day.

Sorry to see you're having trouble with the file. You may want to try downloading it again. Just d/l it myself a minute ago and it opened up without incident.