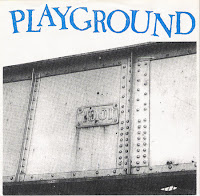 This is a follow up to my entry from about a month ago for Playground's Bent, Lost or Broken album.  A long put-to-pasture trio from the college town of Davis, CA, Playground were prodigiously inspired by Husker Du and Sugar, and as far as I'm concerned adopted a similar tact to Overwhelming Colorfast, Big Drill Car, and the Moving Targets as well.  In a phrase, their music was humble yet poignantly riveting at the same time.  Whether you grabbed the Bent, Lost or Broken CD or not, lay your ears on these four tracks, all culled from two flawless 45s.  So great.  For shame there are so few bands of Playground's caliber around today.  If anyone in the band is scrolling over these pithy words, by all means post a comment! 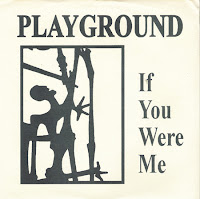 Not in the band, but I thought I'd chime in. I've been trying to get in touch with these guys for a while now. They recorded a several versions of a full length album for release on Popkid but due to delays and some really heinous artwork it sadly never materialized.

The tracks they recorded however were amazing with a much more punchier sound. I have some of the demos which I'd be happy to share, but I'm missing the final version of the album which was phenomenal. Hopefully they stumble upon this post as I'd love to get a copy of that again.

this is a great collection of songs, especially "When Everything is Said and Done."

Honestly, though, the band they most remind me of is Love Battery...

Glad your enjoying these tunes. Would love to hear whatever you have Alan. The two songs on the Popkid single sound way more potent than their album, so I'd love to hear more where those came from. Thanks.

I may have other stuff for the blog if you're interested as well.

Thanks for posting - good stuff. I agree with the Moving Targets reference (both guitar & vox) particularly on If You Were Me / Anything.

I've been following your blog for two or three years now (so far my two favorite posts have been the Moped and Loomis full lengths!) and I've been debating whether or not it would be appropriate of me to suggest for you to check out my band. Now that you've asked I think I'll go ahead and do so.

We're called The Young Leaves, we're from Massachusetts, and we sort of sound like a cross between Archers of Loaf and Husker Du. You can check out our new album at http://theyoungleaves.bandcamp.com

I think you'll dig it!

Thanks for the link. Look forward to hearing the Young Leaves.

Here's one set of the "Lost" Playground recordings:

Unfortunately, this was sourced from a battered cassette tape. I may have access to a better copy and will post if I find it. Might have the two demos lying around somewhere too...

Thanks BUI! Had no idea this existed. Do you know what year this came out? Please keep me in mind if you find those tapes.

No luck on the demos. I think there were like 2 or 3? I do have a mysterious, hand-labeled "Playground" tape. Not sure where it came from and unfortunately it has a tear. I'll see if I can splice and digitize. I'll share if it turns out to be worthwhile.

Thanks BUI. Look forward to grabbing this.

The tracks they recorded however were amazing with a much more punchier sound. I have some of the demos which I'd be happy to share, but I'm missing the final version of the album which was phenomenal. Hopefully they stumble upon this post as I'd love to get a copy of that again.