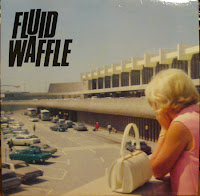 I picked this one up a good ten years or so ago in the vinyl basement of CD Cat in Toronto (the one on Queen Street W. that actually had a cat roaming the store.  Pity that place is gone, but I digress).  It was a $1 bin find, and by and large I treated it as such.  Listened to it once and was somewhat indifferent to it, so on the shelf it sat for a decade.  Pulled it out of retirement for this entry, and although I still find it a tad non-descript, it made a better impression on me the second spin around.  Fluid Waffle were a ramshackle, Ottawa-based college rock aggregation with loose psych-pop tendencies (check out the Farfisa organ proliferating "Odd Man Out").  Overall, vaguely reminiscent of Camper Van Beethoven, albeit bearing a fraction of the irony.  The sweet jangle treatment bestowed upon "Very Big Races" is as inviting as the record gets, and in itself is worth downloading.

Discovered a couple things when I was doing my research on these guys.  The majority of the lineup went onto to comprise the much more renown Furnaceface in the '90s.  In fact, this Furnaceface fanpage lists F/W's rather brief discography.  Secondly, Fluid Waffle reunited in 2007 for an old school, Ottawa punk revival gig which you can read about here.

The story goes that some drunken friend cornered the guys and told them that Fluid Waffle was a terrible band name. Said drunkard hectored them further by saying "With a name that bad you might as well call yourself...Furnaceface".
And so they did, and they did have greater success under that moniker.
Can't say I liked either incarnation and I did try more than once./

Huh. Cool anecdote at any rate. Never heard Furnaceface myself.

Hey Spavid some Furnaceface for you right here. http://rapidshare.com/files/438289585/F-UAAS.zip + check out the youtube video for About to drown from their previous LP Just buy it. Which I did and lost somehow:( Great vid.

Thanks for the link. I appreciate it!

would you please re-up?

Hi, could you please re-up this?