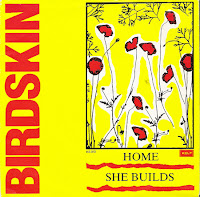 Here's a relatively unknown single from a Dutch trio with a serious jones for Mission of Burma.   Ostensibly, the only details to be revealed about Birdskin arrive by virtue of their Myspace page, which seems to emphasize music from an album dubbed Basement that came much later in their 20-year career.  As for this wax, Birdskin let off some serious post-punk steam occupying the same dense airspace as not only the aforementioned Beantown legends, but to a lesser degree Husker Du and New York's long defunct Flower (the pre-Versus band).  Both tracks make a compelling argument for the band with "Home" bearing a slightly stronger hook than it's flipside.  A Birdskin discography can be found here.

A. Home
B. She Builds

Their single 'Concrete Soil' is also a great song, and they contributed a brilliant song ('See You Burn') to a dutch compilation double album called 'Let's Have A Picnic And Barbecue Some Corrupt Not Self Programming Dee-Jays' from 1989. I can highly recommend that double album, though it's probably hard to find.

Thanks for filling me in Just8. I'll hopefully come across these disks someday.