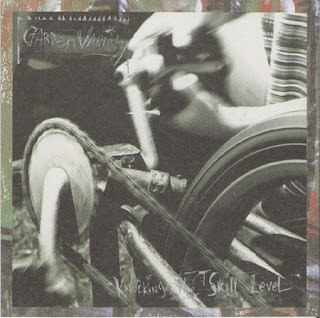 I've long resisted sharing this beauty, as it's already been made available for the taking on a couple other blogs, but no more.  I relent.  This one is too crucial to keep to myself, not to mention the 90 some-odd percent of you that have yet to be familiarized with it.  The '90s produced no shortage of worthy post-hardcore and "paleo"-emocore conglomerations, but for my money, my ears, and just about everything else I could call my own at the time, no one impressed me more than Garden Variety.  Starting with their Hedge 7" ep in 1991, three unsuspecting gents from Valley Stream, Long Island, NY created the most gnarly noise ever to emanate from the famous sandbar they called home.  In addition to the aforementioned Hedge, Knocking the Skill Level was also preceded by a flabergastingly excellent self-titled album on Gern Blandsten Records, that's still available in one configuration or another.

Tastefully groomed on the likes of Jawbox, Drive Like Jehu and Superchunk, Garden Variety came equipped with a wily sense of dynamics, which they brilliantly filtered through a godhead galvanization of dissonance, desperation, and amazingly enough, a healthy dose of melody.  The band roster featured Anthony Roman on the mic and bass, Anthony Rizzo on guitar, and Joe Gorelick on the skins.  Between Roman's scathing, shredded wail, Rizzo's caustic fretboard runs, and a stupendously propulsive backbone in drummer Gorelick, I have yet to find another outfit capable of outdoing Garden Variety's roaring sonic aesthetic.

On Knocking.., the boys cut a cathartic, amped-out swath through anguished, distortion-ridden landscapes, touching upon any raw, exposed nerves in their restless path.  Bear in mind, nothing on this disk come close to approaching something as disgraceful as say, "scream-o," but to this day I'm still stupefied that a power trio who easily approximated the sound of a lineup twice that size could stir up such an unholy raucous.  Yes, the lyrics are oblique and somewhat unintelligible, but the sentiments raised on these songs alone were far more advanced than the work of their peers, not to mention the finely executed song arrangements.  Knocking the Skill Level must be experienced to be believed, and luckily, now you can.  Anthony Roman would go onto far greater renown in Radio 4, who were something of an update on Gang of Four's funk-informed post-punk, and Joe Gorelick would man the drum kit for Retisonic, who also featured ex-Bluetip frontman Jason Farrell.

If it's more Garden Variety you crave, I'm happy to point you at To Live and Die on Long Island blog, who have made available a band-curated collection of outtakes and rarities, but be forewarned, it's designed for the devoutly faithful only.

This sounds great so far. Some of the songs remind me a bit of old Shiner. Thanks for posting this!

Wow, this is great. Gonna grab their other releases as well.

They had a song called "New Guitar Parts" that was really good, from a split 7" with Jejune and also the Anti-Matter comp. Definitely worth a listen.

Yes. Yes. Yes. Thank you all over the place for letting others know about this great record. When you think about all the great music of this era, much of it fails to stand up to the test of time - this record defies that trend; it's every bit as good today as it was the day it was released.

I actually shared the split single with Jejune eary last year. The d/l link should still be active:

Hello! Can you upload self-titled album?!

The Frenchie dog is one of the miniature dog breed. They’re alsoknown as the clown dog because of their fun-loving nature and some evencall them the ‘Frog dog’ because of their wide round heads and sittingposture.