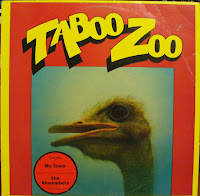 It may not be a particularly fitting way to nightcap 2010 with an ep from a rather random mid-80s band, but I'll probably give you my brief assessment of the year in music later this weekend.  As with the last couple of entries, search engines, portals and such don't lend much in the way of relevent info regarding Taboo Zoo, a saucy power-pop outfit, ostensibly hailing from the environs of Hollywood.  Aesthetically in the same ballpark as Tommy Tutone and Donnie Iris, Taboo Zoo had some serious AOR crossover potential, brandishing a bevy of sturdy power chords amidst the prominent vocal presence of Glenn Doty.  Yes, there's some saxophones kicking around on here, but as luck would have it, they don't mar one iota of this fleeting ep, with "My Town" and "I'm Alive" commanding the most of my attention, and hopefully yours as well.

Could you please re-up this one when you have the time?

Thank you for dedication