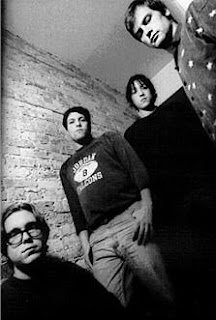 Okay, this was completely random find.  A few months ago, I was searching for something on Ebay non-Polvo related, but one click led to another and I stumbled on a pre-recorded mix tape of sorts that included these seven demos from Chapel Hill legendary, oddly-tuned tunesmiths.  No track list was provided nor were any other pertinent background details including the year they were committed to tape.  By my deduction, this material originates from the era of Polvo's uber-innovative debut album, Cor-Crane Secret which dropped in '92.  In fact three songs from that album ("Vibracobra," "Sense of It," and "Bend or Break") appear here in the form of earlier versions or alternate mixes. "Double Scorpio" so far as I'm aware did not see release in any form save for a 1993 Peel session, and this version differs tremendously.  Their reading of Wall of Voodoo's '80s classic "Mexican Radio" sounds as though it may have appeared in the same incaranation on the Freedom of Choice new wave covers compilation which they contributed it to back in 1993.  The only song on here that has me scratching my noggin is the second track in, which I simply can't identify.  If any of you are up to the challenge, please leave a comment.

Some two years ago I shared the first Polvo ep, specifically the cd reissue thereof, which is still up for grabs, while Sunshine Smile Factory blog has compiled Polvo's various radio sessions, including the 1993 John Peel set I noted above.

the second track is "channel changer" from cor-crane secret.

thanks for posting this, though i wish you'd go with mediafire for these things. aside from rapidshare's whole irksome "monthly limit" deal, there's that stupid kid frowning at me and looking at his watch while i'm waiting for my download. seriously, fuck him.

Thanks sickballoons! Considering that song was on Cor-crane you think I would have caught it myself.

I apologize for your Rapidshare torment teadoust (and the rest of you as well), but Mediafire has some HUGE downsides, not the least of which is the oodles of spyware that it dumps on your system. I have to cope with it enough just in terms of downloading files from other blogs that host there. Ethically, I don't feel comfortable putting my viewers in a position I'm loathe to encounter myself. Personally, I have a paid Rapidshare account. They're really not that expensive, especialy if you use Rapidshare on a weekly basis like myself.

I should also add that downloads via Rapidshare are less than reliable. There have been occasions where I've had to wait days for files on there to d/l in a reasonable amount of time (no joke). All file hosting companies have their drawbacks I supppse.

I'm a little late here but the versions of "vibracobra" and "the drill" seem to be the same ones that appeared on their "vibracobra" 7". So I'd venture a guess this is a 1991 session recorded by Caleb Southern and Todd Goss, as stated on that particular 7".

the download is gone and this was up on youtube but now gone, anyone have an active link?

The link is dead - can you reupload? Thanks!