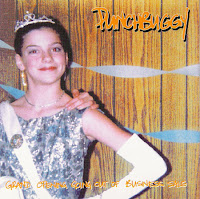 I haven't dedicated much space to Ottawa's Punchbuggy, save for a split single with Treble Charger, but that's about to change starting right about...now.  Grand Opening... was the 1996 follow-up to a tremendously promising debut, '94s All Nite Christian Rollerskate, that I couldn't get enough of when it passed into my hands from the music director of the college radio station I was spinning for at the time.  GOGOOBS wasn't quite as flooring as that first album, nonetheless it was clear Punchbuggy hadn't blown their collective wad yet - not by a long shot, with such buzzing, incessantly hooky nuggets as "Yoda", "On the CBC," and "Five and Ten of the Other." Fellow country-mates the Doughboys and Killjoys were apparent inspirations to these excellent punk-pop purveyors, and if you ask me that's some damn fine company to be in.  Definitely in the same league as Big Drill Car and Armchair Martian too.  Punchbuggy were something really phenomenal.

That aforementioned debut, All Nite Christian Rollerskate and the band's 2002 parting shot, The Great Divide, are available on iTunes, but strangely enough this one isn't (though cds are fairly cheap thru Amazon), nor is their third record, My Norwegian Cousin.

The one Punchbuggy record that I don't have! Thanks!

Love me some Punchbuggy. Is there any chance that you can post My Norwegian cousin?