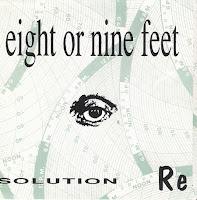 I was pretty jazzed to stumble on this album a few months ago for a couple of reasons.  First, Jamie Hoover from power pop demigods the Spongetones produced about half of this disk, and secondly Eight or Nine Feet hailed from the very fertile North Carolina indie rock scene of their era, that being the late '80s.  On many levels, Resolution didn't disappoint, but when the rubber met the road I realized my expectations were a bit high.  A Raleigh-based quartet, Eight of Nine Feet were too linear to be lumped in with the “New South” crop, rather they tilted vaguely in the direction of the Connells and Miracle Legion. At their most inviting, “Keep Your Eyes Peeled” plays like the second cousin to REM’s “Harborcoat,” but even that selection didn't quite bear the edginess I had been holding out for on the album as a whole.  The swift and twangy as-all-get-out hoedown, “” closes Resolution out on a decidedly different tip than it’s ten preceding cuts.

As often is the case, Trouser Press has their say on this artifact, and reveals that the band had a tape out prior to this wax dubbed Flint, which I would imagine is pretty impossible to come by at this stage in the game.  As a side note, guitarist Bo Taylor parlayed his talents to a pair of regional outfits in the early '90s, Dish and Motocaster, who I've delved into previously on these pages, to one extent or another.

As a local rock crit of that era, I can tell you they were quite good live in a bar.

May I also recommend the following Raleigh area bands of the 80's/90's: Arrogance, Vanilla Trainwreck and Johnny Quest for starters. It was quite a scene, Raleigh-Durham-Chapel Hill, that is.

Thanks Tony. I am already familair with V/T, and will have to investigate the other bands you mentioned.

Wasn't a band called the Fabulous Knobs from Raleigh too? I remember seeing a Youtube clip of them on some wacky varity show from the '80s. Too bad I was never able to track down affordable copies of their records.

Shameless plug here... I do have an internet radio station devoted to the scene Tony spoke of, and wrote about when it was happening. check out Comboland Radio. I play the bands that Tony mentions, the band featured in this article, and hundreds of other from the late 70's to current day.

The Fabulous Knobs were incredible, Spavid.

Two of the guys from the Knobs went on to write "Battleship Chains" for the Georgia Satellites. Look up Terry Anderson's OAK Team for what they're up to now.

let me look around my basement for their records. In the meantime, check out my pal Steve's project

Thanks for the links and plugs folks. I've heard the Comboland comps, and now I'll investigate Comboland Radio.

.... the NC Triangle scene truly was not to be believed in those days, and EONF were killer live, joyful band, at Halloween @ the Design School / NCSU, etc. Just spotted the LP on ebay at $49. from NYC. Rare!

I can say 8or9ft live was a lot of fun.... I just opened a box that had been taped shut for 20 years and found my "Flint" tape in mint condition. Plan to map to mp3 as soon I find the box with the adaptors and A to D.