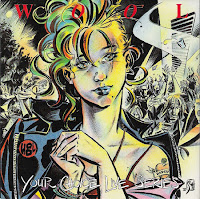 By request, here is Wool's entry to the '90s Your Choice Live album series.  This is a blatant and pandering follow-up to my Wool singles collection from last month.  If you will recall, Wool were an L.A. based grunge/alt-metal/punk delicacy that had their origins in the D.C. hardcore band Scream.  After the band dissolved, largely in poor response to their Box Set album (1994), guitarist Franz Stahl would soon transform himself into a Foo Fighter, but like Wool, his tenure with Dave Grohl and Co. was relatively fleeting.  As for this live disk, derived from two live European shows from the spring of 1995, it contains virtually every song you could hope to hear from the rather voracious quartet at the very apex of their game.  A downright blistering way to go out if you ask me.  A far more thorough history of Wool can be read on their Myspace site linked above.

thank you so much for posting this. i've been looking for this album for years to no avail.