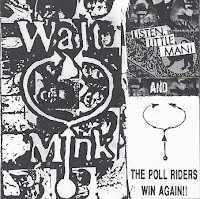 In the early '90s Minnesota's Walt Mink were adopted by a lot of ear-to-the-ground, indie pop geeks, though the band were hardly ones to be hemmed into three simple chords and bright choruses.  My personal familiarity with the band extends only to their 1996 El Producto platter, an admirable disk but a colossal major label debut flop.  Before Producto came Miss Happiness in 1992, and Bareback Ride a year thereafter, both issued on one of the choicest indie imprints of the day, Caroline Records.  But even prior to those albums a few early adopters of Walt Mink were enlightened enough to procure two nascent cassette releases, Listen, Little Man in 1990, and The Poll Riders Win Again!  Last year I purchased what appeared to be a band sanctioned CD-R reissue of the those two cassette demos...at a thrift store for a mere $1.00.  I shit you not.

For those of you that happen to fly the Walt Mink flag, you'll notice that a bevy of the songs enshrined on this disk also appeared on Miss Happiness, albeit in are re-corded incarnations.  Even though Listen... and Poll Riders were unleashed within a year of each other, the two albums chart some measurable musical development.  Starting with the first of those two titles, the lovingly lo-fi Listen, Little Man! is chockablock with classic rock homage, and sometimes embarrassingly wanky, fretboard squalls that reveal the boys have been adeptly schooled by Hendrix, and a then burgeoning Billy Coragan.  Pure riffola doesn't come much chunkier than it does here, and if anything else, Listen... is air-guitar cotton candy wrapped on a drum stick.

Reportedly recorded in a living room, The Poll Riders Win Again! is a trifle more subdued and significantly more melodic, lending a more apt canvas for the deftly crafted "Twinkle and Shine," and the buzzing "Everything Worthwhile."  An unconventionally electrified reading of Nick Drake's "Pink Moon" is surprisingly right on the money.  It along with "Twinkle and Shine" would later be recut for Miss Happiness.  Walt Mink were on the cusp of something greatly encouraging here, and luckily they would soon break to a modest national audience.

Yes. The Mink rock. Listen to "Love You Better" from their first album and compare it to some vintage Rush. Could it be the best influence Canada has had on the USA since the beginning of the NHL?

Oh gosh! SO not schooled by corgan. Though he used to come to our Chicago shows sometimes...

For some reason the link doesn's work unless I upgrade to RapidPro. Am I doing something wrong?
@candice: I always thought Corgan was ripping off Walt Mink. Now I KNOW he was! :)