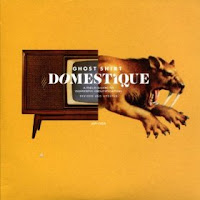 As ponderous as I find the lofty, orchestral-lite formula wunderkinds du jour The Arcade Fire have taken to the bank (also qualifying, but to a lesser extent Broken Social Scene) their artsy angle isn’t entirely unappealing in itself, rather I’ve never been one for style over substance. Columbus, Ohio’s Ghost Shirt (who like the Arcade Fire also happen to be a co-ed proposition) miraculously meet my criteria, as it were, for equivalent quotients of both of those ever so tricky but all too crucial facets - much in the way a mid-size sedan (say a Camry or a Malibu) comfortably accommodates a family of four. Um, sure. If only a truly substantive indie rock could be likened to sedan, but for those of you who have made it this far into my synopsis, I think you get my drift.  In a nutshell, had the Arcades taken a more modest tact, they just might be on the same wavelength as Ghost Shirt.


Robust, but unencumbered, opulent, yet economical, Ghost Shirt’s Domestique doesn’t merely strike the proper “balance,” it downright charms, woos, and dazzles anyone within earshot who possesses an affection for bright, lucid guitar pop tethered to briskly pulsating tempos. Operating as a quartet without extraneous accompaniment, pretentious overtones and baroque eccentricities aren’t even a consideration here. Samantha Kim’s sweeping violin fills, featured prominently on several tracks, embellish the arrangements without overpowering them. In fact, the strings are merely a winsome backdrop, as are the swarming synths that occupy “Sleep,” a number which rings reminiscent of Julian Casablanca’s recent solo dabbling. Ghost Shirt’s most intoxicating and buoyant selections play out during the first half of Domestique, with the overall tenor of the album easing into a comparatively serene home stretch. Though not consistently fervent, Domestique is consistently palatable. There’s plenty more where this came from, with G/S releasing a “single” per week online for an entire year. At last count they were up to 26.

Domestique is available from Insound, Amazon, and more digital retailers than you can shake a stick at.
Posted by spavid at 5:55 PM

Thanks for paying attention to a band that deserves all the attention that can be paid.

All the single links appear dead.

Wow, had no idea they had a new album in the can. Thanks for alerting me. As for the dead singles links, I downloaded a bunch of them, so I may share them later, with the band's ok.

Oh, yeah - the new record, 'Daniel,' is priced at "pay what you want." For anyone who downloads, please pay more than $1. It is worth far more than that.

One more thing - Ghost Shirt recently played a remarkable little DIY music festival in rural Mississippi, with people from all over the country in attendance. A review of the event, with sound clips of the artists and some outstanding photography (including GS) can be found at: http://thisisamericanmusic.com/home/2010/11/19/wigginstock-2010.html

I'm all for a band with the spirit of Arcade Fire but less of the fluff. I'm definitely going to look into this new pay-as-you-wish album, 'Daniel.' An album about me!