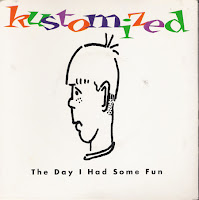 To know anything about Kustomized is to know a thing or two about ringleader Peter Prescott, a bloke who was one of the driving forces behind seminal Boston post-punkers Mission of Burma, and later a figurehead for the Volcano Suns.  For a band on Matador Records, Kustomized (who also feature Bullet LaVolta alum Yukki Gipe, appearing here under the name Kurt Davis) revel in the noisenik tantrums of many a Homestead Records or Touch & Go conglomerate.  Released as a precursor to the first proper Kustomized album, The Battle For Space, the A-side of this single, "The Day I Had Some Fun" raises an unholy racket, with frankly unappealing persuasion...at least on the initial spin.  The real reason I came here was for two key B-sides, both covers.  First up is Wire's Pink Flag-era morsel, "Surgeon's Girl," immediately followed up by "Stranded," a sheer punk classic originating from Australia's pioneering Saints.  As one might suspect, Kustomized don't outdo the real McCoy, but nonetheless do some seriously wailing and ragged justice to them.

A. The Day I Had Some Fun
B1. Surgeon's Girl
B2. Stranded

U would like to request a re-up of this if you still have it. Thanks!

Thank U very much for the new link. Just noticed my typo.