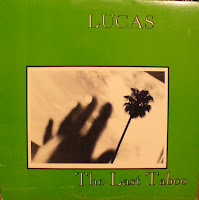 The moniker of this Oakland, CA four-piece is ostensibly derived from the surnames of drummer Martin Lucas and fret-manipulator Betsy Lucas. Both are credited as singers here, (as well as bassist David Ziegner) but on many selections it’s hard to tell who’s on the mic, lending an occasionally androgynous, but inoffensive mystique to the music.

If the bright title track doesn’t lure you in with it’s, soothing Steely Dan-stride, it’s safe to say that nothing on this ep will. Lucas are what the dBs might have sounded like had they really milked the blue-eyed soul angle they tended to exhibit on occasion.  With perhaps the exception of "Wasn't Expecting Much" (which is largely what it's title lives up to), The Last Taboo is aglow with smart, lucid guitar pop, that tacks slightly left of center without careening off the deep end.

Betsy Lucas has since struck out on her as a solo act, and  you can sample some of her fine post-Last Taboo music here.