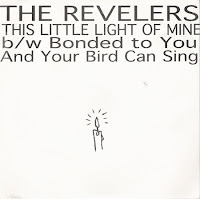 I'm not sure if Cleveland's Revelers were the toast of their hometown of Cleveland during their 1990s run, but if not, I'd be happy to raise a toast to them any day, because their update on Merseybeat pop 'n roll was nothing short of impeccable.  Their career spanned 1989-99 and produced four albums and roughly half a dozen singles, "This Little Light of Mine" included, and is as suitable an intro as any I might add.  Featured here are two flawless, retrofitted originals, as well as their spin on a Beatles classic.  Crucial stuff in the same league as early Apples and Stereo and Failure-era Posies.  The a-side can also be found on The Revelers On Top cd.  I'm not sure how easy it is to track down their back catalog these days, save for their last two albums which were released via SpinArt Records and available cheap on Amazon, but this online discography is helpful.  Check out the bio linked on their Myspace page linked above for the full dirt on this talented bunch.

A. This Little Light of Mine
B1. Bonded to You
B2. And Your Bird Can Sing

Hmmm, very interesting. "Bonded To You" is a Bill Fox song (formerly of the Mice). It's on his Transit Byzantium album (which SpinArt also released). Also, Tommy Fox played on the Bill Fox album AND on this Revelers single. I had no idea.

Awesome live band. Don't think any of their records truly did them justice. Saw them in Philly with You Am I and Sloan ('97?) and it's still one of my Top 10 shows of all-time.

Damn, I didn't realize "Bonded to You" was a Bill Fox song, and I actually own that album you speak of (granted, I probably only gave it one spin), but anyway thanks for pointing it out.

Agreed, great live band. I saw them at least 8 to 10 times in Columbus and Cleveland over the years. Watching Tommy Fox drum was always the best part--I was star struck by the former drummer of the Mice, who I never saw live (sigh). Great post!

Re-up request. Would really like to hear this one, spavid!

Hello,
can you please repost this 7''?
Thyank you very much
Stathis

Many thanks for answering our re-up requests. Cheers.