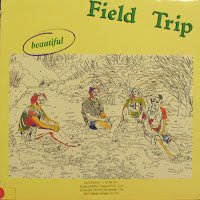 Beautiful was (and for that matter still is) the rambunctious and raucous debut platter from Pleasanton, CA's long disregarded Field Trip.  It was the first of three F/T albums to enjoy distribution through Warner Brothers, but despite having the backing of such a powerful and ubiquitous entertainment conglomerate, I never once encountered the quartet on radio or MTV.  Trouser Press opines that "in a character-filled voice, guitarist/songwriter Jim Galbraith orients the rocking pop band towards Minneapolis..."  In fact, the closest any Twin Cities luminaries come to informing Beautiful might be Soul Asylum, particularly that band's Twin/Tone-era output.  A more accurate comparison would be the ever snarky Too Much Joy, who Field Trip were actually labelmates with for a spell.  Perhaps the Meat Puppets as well, but not so much.  Though the Trip's follow-up albums Headgear and Ripe were more finessed (and in the case of the latter, um, ripe), Beautiful offers plenty of frivolous and fun romps, with some occasional soul-searching musings.

Went to San Francisco in 2000 and found a copy of this album with a different cover and it was titled "Beautifuck" instead of "Beautiful".

I have always loved this band and only know one other person who has heard of them from another source besides from me.

All three albums are very solid and enjoyable.

At least one of the guys from the band (if not more) are now in a kids music band called The Time Outs.

Hmmm. I wonder if Beautifuck is an alternate version album, or one and the same. Interesting. Thanks for chiming in Nez.

Thanks so much for this. I've been looking for a rip of this for years.

I have all three original Field Trip albums on cassette tape. The "Beautiful" cassette is messed up and hasn't worked in years... so excited to listen to it again.

Mr Nez, if you found a copy of "Beautifuck" then you found an extremely rare record, since that was released in very limited quantities. There are only 69 copies of it.

Hello, is there any chance of reposting this great release(Field Trip - Beautiful (1989, Ruby/WB)again in 2015?

Thank you! This is impossible to find on CD.

The new link is corrupt. could you possibly update? Thanks.

could you reup please?

thanks very much! i had found headgear from half.com (remember that site? not sure if they are still around) many years ago and was very pleased with the quality of the CD.