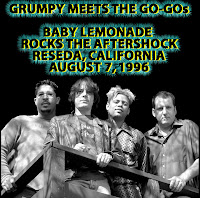 Better known in some circles as Arthur Lee's backing band for the final touring version of Love, Baby Lemonade have been even more vital to these ears as an entity unto themselves.  The "entity" in question released just two LPs (68% Pure Imagination in 1996, and Exploring Music two years later) and a couple eps before going on indefinite hiatus at the turn of the millennium.  All of these were independent releases that didn't make much of a dent outside their home turf of L.A.  Live Baby Lemonade bootlegs are a rarity, but on a sultry August '96 night in Reseda, CA at a dive dubbed The Aftershock this concert was committed to tape, and roughly ten years later disseminated on the internet to a selective few, myself included.  The setlist is drawn almost entirely from that first album 68% Pure Imagination, which means plenty of crunchy, post-paisley rock, and yes, the boys indulge in a Love cover, fittingly enough (ok, it was also on the album too but who's counting)?

The curator of this recording created some none-too-spectacular artwork, including a tray card bearing a track list that's slightly disorienting...so don't blame me.  Enjoy (or not).

Thank you very much for all, friend. I love this site. Always fanastic music.

I think they have 3 albums, you forgot The Highlife Suite (2000)

I've always The Highlife Suite to be more of an ep...maybe we can split the difference and call it a "mini-album."

For the next line of re-ups? I'll be looking. Thanks.

The link has been updated. Thanks for alerting us.

I saw your comment about The Highlight Suite. For some reason, the digital copies don't seem to have the 26 plus minute unnamed track on them that comes at the end of the listed track. Added on, it certainly puts Suite at full length CD status. That might be the reason you view it as an extended EP. I'm still looking for it and I'll send it, if I find it. If not, I may just buy a physical copy. If you have this on the issued CD and there is no untitled track, then my info is obviously wrong. You might want to check it out, though.

There's music for all 24 plus minutes on that track. The problem is, is most of the time, at normal audio levels, you can't her it. It's very slow piano. I faded in to the last third of the tune and jacked the volume and I like how it ends the LP. Seems like there might have been a problem with the label... Thanks for the reup.