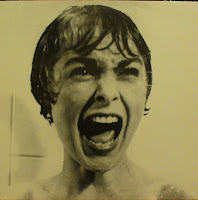 If you're a longtime Didjits fan, you're likely acquainted with this punishing live bootleg of their performance at London's Kilburn National from September 1990.  As one of Champaign, IL's most valuable exports, the Rick Sims-helmed, four-on-the-floor power punkers, produced some truly bitchin' barnburners in their time, including such scorching platters as Hey Judester, Hornet Pinata, and Full Nelson Reilly.  I'd argue that Backstage Passout is as crucial as their studio output, being the utterly potent, white-hot live document that it is.  This particular gig was in support of their then recently released Hornet Pinata LP, so naturally much of the setlist draws from it (and yes, it includes "Killboy Powerhead," the track the Offspring covered for a certain multi-million selling album in the mid-90s, earning Sims more than a few martinis and a chaise lounge on the beach).  Aside from the absence of "Sweet Sweet Satan," there's nothing to complain about here, and in fact, Passout ain't a bad place for newbies to get their first taste.  Plenty of hotwired "car songs" here as well, so with that in mind, eat their dust! 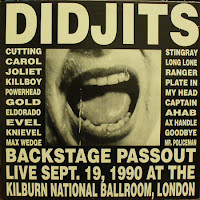 Great band, not blogged enough! Does anyone have any of their pre-vinyl cassette releases? I've got Signifies My Go-T but would love to hear Whoop My Head and Durga Durga Durga!

I have mp3s of Go-T, but am unfamiliar with the other ones you mentioned. If anyone can come up with these, don't be a stranger!

Remember the excellent 6 song video 'Knocked Up'? 'Loan Me A Buck' on that is from 'Whoop My Head'. They definitely exist because they were reviewed back in the day by Maximum Rock'n'Roll.

Great post. Saw the Didjits many times as they regulary played Wisconsin clubs. Any posts of releases earlier than T&G's would be appreciated.

Wow. Never knew this existed. Could you 're up this?
Cool blog

Just refreshed the link. Thanks for alerting us.

I'm not sure if this is really a bootleg... I believe it was distributed by T&G (I got my copy from Southern in the 90s).

There's also a Didjits video compilation (have it on VHS, don't know if it made it to DVD like the Buttholes' video...).