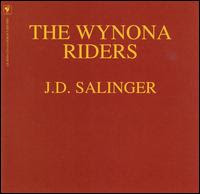 Why, Nona? Well, by now, everyone and their goldfish learned of the passing of famed writer/recluse J.D. Salinger who departed on January 27th, some fifty years after he decided to drop out of the publishing world, and by and large, rest on his laurels. For me, Salinger wasn't just synonymous with The Catcher in the Rye, but also two other names: Winona Ryder, and the entirely unrelated band The Wynona Riders. For me, the tie-in with Salinger, the actress, and the band was a no brainer. For you, perhaps, dear reader, not so much so, therefore I'll explain. 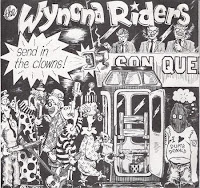 Any scholar of the somewhat "fallen" actress Winona Ryder is well aware of her affection for Salinger's writing - so much so that she pointed out to one Rolling Stone scribe that she owned first editions of his entire catalog (something like four books from what I recall). Fast forward to 1989. Ryder was riding high on the crest of her successful starring roles in Beetlejuice, Heathers, and Great Balls of Fire. This was also the year that a scrappy but ultimately ingenious East Bay punk-pop band swapped the "i" in her first name for the "y" in her surname, and proceeded to use it as their crafty moniker for the better part of the '90s. Another Bay Area band of note, Green Day, was in the early stages of hogging the spotlight, but the Wynona Riders, who also flew the flag of suburbanite angst were equally as catchy but ten-fold more sophisticated, not to mention a lot more diverse. On the heels of a demo tape and this slim batch of singles, not to mention lineup changes in the early '90s, the Riders were already branching out into other projects and were about to pull the plug on the band entirely. Not so as luck would have it. Instead, in 1994, the band decided to re-record pretty much their full repertoire (in vastly improved fidelity) for an essential but overlooked album on Lookout Records, J.D. Salinger. that was released the next year. The album jacket was a picture perfect mock of the color scheme and font that adorned the paperback version of Catcher in the Rye. 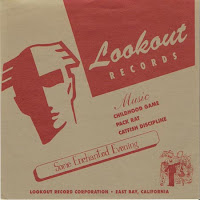 Though the Salinger album would have been an obvious choice to share here, upon doing some quick research I discovered that not only had the album received the blogger treatment elsewhere, but was commercially available through a bevy of digital retailers. Instead, I opted for their 7" catalog - two eps, and a split 45 with Jolt, who I profiled a couple years ago. Along with another Cali crew, Big Drill Car, The Ryders captivated my senses like few bands before or since, and these records aren't a bad way to acquaint yourself with their unique stripe of punk. Previously, I've shared the Riders split 10" ep with Lynyrds Innards. Up for more? There's also two Riders' spinoff projects that I've blogged about, Latter Day Saints and Toyboat featuring lead-Rider, "Skip." I might add more to this later, but for now, onto the music:

I'd like to know how the hell you tracked down the latter day saints single?

Neat! Be sure to visit my blog, follow it, download all my music, and just be a Whorestar. Thanks! (see www.andywarstar.blogspot.com for more details)

Thanks. I've been what you might call a passive fan for awhile ( a few favorite songs, but not really an engaged listener) so when I went to listen to something else I was pretty surprised at the poor quality my 7" vinyls rips had been. This is will do just fine!

Thanks for re-upping this post. Maybe someone could post the demo tape since that site doesn't have valid links anymore.