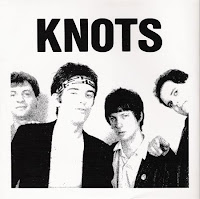 I never really understood how anyone could justify paying $700 for a 45 of any stripe, but it happens regularly on Ebay, including an original copy the Knots lone wax, originally pressed a solid 30 years ago. The single in question has been blogged about over on the Killed By Death website, but I decided to share my recently reissued copy ripped at a higher bitrate than theirs.

This record, not to mention the band's backstory make for some highly compelling reading in a rather mammoth article located at Attacking the Beat blog. The short version is that the Knots were a born and bred New York City punk crew, making a very competent go of it in shadow of such local heroes as the Ramones and Heartbreakers. The band called for a pressing of 1000 copies of this disk, but something was egregiously lost in the translation to the record pressing plant staff who pumped out ten times the originally requested amount. Most never saw the light of day and remain unaccounted for. Even lead Knot Joey Pinter swears that he doesn't possess a copy himself. The band eventually caught the ear of Steymour Stein of Sire Records, but for a variety of reasons (explained in the Attacking the Beat story) no further music from the Knots materialized. The reissued version was released in 2008 on 1977 Records, and has since sold out.

Despite their obscurity, both "Heartbreaker" and "Action" are two of the classiest, most sneering quintessentially genius punk songs of the Knots' era, rife with brisk tempos just a few notches shy of hardcore. Numerous comparisons can be made, most obviously the Dead Boys, and less obviously the Germs, but the Knots unintentionally predated the buzzsaw assault of bands ranging from White Flag to the more recent Marked Men. Check out the aforementioned Attacking the Beat article for the whole story.

if anyone is interested in what Joey Pinter is doing these days.
http://www.myspace.com/joeypinterrockandroll