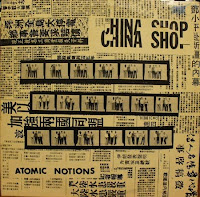 I might only be leaving this one up for a couple weeks folks, so grab it while you can (will explain in a moment). New York's China Shop pushed the "avant" envelope as far as one could without encroaching into bona fide No Wave territory (translation: experimental while still loosely resembling rock music). Atomic Notions evokes the urban, congested vibe of New York City from every pore - cosmopolitan, but grimy and even a little surreal to boot. When this came out in '81, it would have made for an ideal soundtrack to a self-guided walking tour of the Bowery on say, a steamy 89 degree afternoon.


My favorite selection here is by far and away "Kowtow," with it's swarmy brew of ominous chords, warm rhythms, and Juan ‘Naux’ Maciel spoken/barely sung vox. Elsewhere, the dissonant but strangely infectious "Monkey Talk" and "If It's New" are well informed by Gang of Four’s funk inclinations. All four tracks here all turned up on an a recent web-only reissue of their catalog, 21 Puffs on the Cassette, which I happened to review for Big Takeover magazine a few years ago. Here are some excerpts:


Fueled with warbled-keyboards and funked-up rhythms, China Shop’s weirdo groove fell somewhere between art-damaged post-punk and utter amateurish capability. 21 tracks here absorb this generous retrospective, and just like snowflakes you never get two alike. This kooky crew took up a few semesters at the Gang of Four school of syncopation (dropping the Marxist rhetoric), loosened Wire’s stiff neckties, and took a page or two from Talking Heads, and funky stateside contemporaries The Big Boys, and even Prince. Some of the more promising moments like the appealing “Kowtow” and “Atlantis” could pass for no-wave classics from a parallel universe...
So sayeth I. Since the 21 Puffs... collection is still readily available for online purchase via the link above, if you enjoy what you hear consider plunking down a few dollars and support the band, albeit nearly three full decades after the fact.
01. Monkey Talk
02. Walk on Lightning
03. Kowtow
04. If It's New
https://www87.zippyshare.com/v/GdX526ug/file.html
Posted by spavid at 5:45 PM

Juan "Naux" Maciel died in 2/2009. He played with Richard Hell and Robert Quine on the "Destiny Street" album.

I wasn't aware of that. Way too many music casualties these days. Very sorry to learn of his passing.

Hey, thanks so much for posting this EP. I'm Steve
Cohen and After meeting Naux at the Soho Music Gallery, we started China Shop together. Originally with Richard Edson, who went on to play with Sonic Youth And Konk, before his acting ship came in with the Movie "Stranger than Paradise." thanks for the Support on the the 21 Puffs on the Cassette Masters. Anthology is on Hyatis, it's ok with me if you'd like to post the entire 21 Puffs. Anyway, just found this post today, can't say I look to much into China Shop's press. Very beat regards