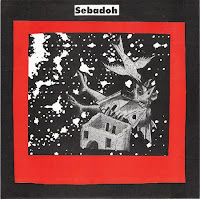 Even if Sebadoh weren't your cup 'o joe, this split might be worth investigating if you were at least able to appreciate SST-era Dinosuar Jr - and I'm gonna tell you why. Before Sebadoh really got rolling in the late '80s, Lou Barlow's main gig was as bassist for Dino Jr. Though he didn't make it public at the time, the sensitive lo-fi tape wizard was suffocating under the thumb of one J. Mascis. As you may recall Dino's classic second album, You're Living All Over Me, closed with an awkward, often jarring sound collage of sorts dubbed "Poledo." Interspersed between the song's noisier elements, were some relatively tuneful, albeit warbled passages sung by Barlow, who's vocals really didn't have any presence elsewhere on the album. "Poledo" wasn't exactly an enhancement to You're Living... but was tantamount as a concession by Mascis' to his fragile cohort, according him one fleeting moment in the sun. If you're familiar with this track, you might agree with me that buried deep in "Poledo's" murky, caved-in mix was a muffled cry for help from Barlow. Once emancipated from Dino Jr, after the band's next LP, Bug, Barlow had free reign over his idiosyncratic muse, and of course, his four-track recorder. One of the more melodic fragments from the aforementioned "Poledo" was salvaged from the Dino tarpit and reimagined as "Toledo," leading off Sebadoh's side of this single, which should be instantly recognizable to seasoned ears. Brought back to life with new found clarity, not to mention a juicy hook, Lou Barlow was finally able to complete his thought so that the rest of us could finally get a reasonable grasp of it...all in the span of 90 seconds no less. Too bad that "Toledo" never made it into the digital era, as was the case with the two numbers following it (though Eric Gaffney's "Nice Day..." is a bit of a waste). 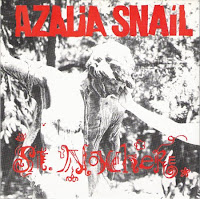 Though I was just able to spill a good 300 words on Sebadoh above, I largely have to plead ignorant on Azalia Snail, but I'm sure you can read up a good bit about her, and her extensive back catalog by visiting this website. "St Nowhere" is definitely the more approachable of the two selections occupying Azalia's side of this wax.

ok johnbuck100 again - thank you for the 2nd killjoys again - the 13th track, rec room is amazing. can you please do the 3rd cd as well? i am totally hooked. Curious how things ended with this band. did they morph in any bands after?

also, if I may be so bold as to add another comment to the 2nd killjoy cd, they are so much more than the lemonheads. track #6, space girls is a beautiful acoustic number, and track 7, brand new neighbour, (canada spelling) clearly has teenage fanclub written all over it. i love this band. makes me feel 28 again! : )