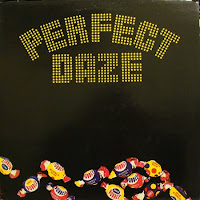 Ever hear of a place called Ipswich, England? Neither did I until I very belatedly caught wind of Perfect Daze, a late '80s combo that hailed from that very city. A bountiful CD anthology, Five Year Scratch, was my intro to the band, and made such an impression on these ears that I tracked down some of Perfect Daze's original vinyl editions. So far as I can tell, during their lifespan they only released these two eps, possibly a 7" and some demos. The 22-track Five Year Scratch compilation that I mentioned above managed to overlook a bunch of tracks from this pair of eps, so I thought I'd fill in the gaps by posting them in their entirety. 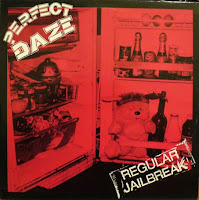 Brandishing a dense, maelstrom of concussive guitar fire-power, channeled through Marshall stacks and pedals galore, Perfect Daze took some highly refined melodic cues from contemporaries Mega City Four and the Senseless Things, thereby placing them squarely in the category of British bands inspired by such ingenious Minneapolis godheads as Husker Du and Twin-Tone era Soul Asylum. If it sounds like these tunes are inching themselves well into the red, it's probably because they are (or maybe I just got carried away a bit with the recording level when I was making the transfer). Pound for pound, I'd say the Regular Jailbreak ep trumps Bubblegum, but if you're at all inclined to either of them, do yourself a favor and procure a copy of Five Year Scratch directly from the label, Boss Tunege.

Grab both records here: http://www64.zippyshare.com/v/qjM8gYax/file.html
Posted by spavid at 8:29 PM

I picked the Bubblegum 12in sometime in the late 80's early 90's but had no idea about anythis else. Thanks for the post!

Bubblegum was my personnal hit in 87. Remember i was in contact with the Daze in those times...seemed to be fun livin in Ippswich... Great smash EP...love them till the bomb drops!

Wolfie also played in The Stupids (at least on their first album).

I would love to get a hold of these - I have Bubblegum on tape from John Peel in the 1980s and had completely forgotten about it until someone posted up the audio on their Facebook this morning - sounded incredible!

Thank you for making this available again - you've made my day :-)

Could you please reupload these?