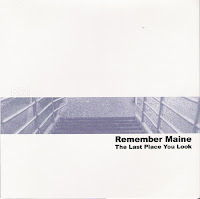 Before William E. Beckett got his neuvo pop-punk on with flash in the pans The Academy Is... (formally The Academy) there was Remember Maine. Essentially a solo acoustic precursor to Academy, Beckett seemingly became enlightened by Dashboard Confessional just prior to committing The Last Place You Look to tape. With a well-worn copy of The Swiss Army Romance tucked under one arm, and a six-string under the other, Beckett just went with it and wailed out ten melodically charged ballads that proved to be nearly as cathartic as anything his mentor, Chris Carrabba, was dishing out at the time.


I tend to cringe when taking this CD off the rack, given that I mailordered a copy straight from the man himself who never made good on his end of the deal (I eventually found one on Ebay years later). I hope he spent those ten dollars well. So much for him being a sensitive emo guy...but don't let that stop you from downloading this.
01. Eastbound Traffic
02. Streetsigns and Sidewalks
03. Don't Mess With Texas
04. Waiting Up
05. The Hunt Club
06. Forever Ended Today
07. Broken
08. Winter Park, Colorado
09. The Gap Effect
10. Act 3, Scene 4

You are just the worst kind of person! Don't hate the blogger, hate the blog...or something like that. Kidding of course.