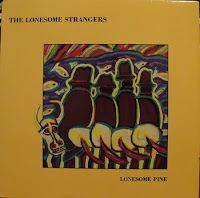 Here’s one for all you cowpokes out there. The Lonesome Strangers were an early alt-country quartet with a decidedly traditionalist bent, ostensibly hailing from the L.A. area. These boys played it so straight laced, it’s hard to tell if their debut, Lonesome Pine was a sly send-up of their genre of choice or wholly sincere. Founding member Randy Weeks went onto to record several solo albums, and has guested on records by such bona fide country artists as Dwight Yoakam and Chris Gaffney.


It’s Lonesome Pine's livelier offerings that do it for me, namely the introductory dust-up “Don’t Cross the Bad Man,” and “Here Comes the Night,” the latter popularized by Them featuring Van Morrison. Overall, the Strangers were way more Hank and Cash than the Meat Puppets or Tupelo. Finally, word on the net is that the bassist for the Strangers once dated Lucinda Williams. All this dusty, boot-kickin’ cross-pollination, I’m telling ya… Click on the hyperlinks in the first paragraph for more crucial biographical data.
01. Don't Cross the Bad Man
02. Ton of Shame
03. Lonesome Pine
04. Here Comes the Night
05. 8-Ball
06. Hillbilly Music
07. Modern Don Juan
08. The One Who Wore My Ring
09. Walkin' Over Hot Coals
10. Stranger Malone

ooh, nice stuff! do you happen to have the Geraldine Fibbers' early comp "What Part of Get thee Gone don't you understand?"

Sorry, don't have anything by the Geraldine Fibbers, but did a quick Google search for the comp you mentioned. It looks like you can get it used from Amazon:

They were sincere. I was in a band with Jeff Rhymes right before he and Randy formed the L.S. I wanted to go more pop, and he was leaning toward country. We were doing at least one L.S. song in this band, written by Jeff. Finally, I had enough, and told Jeff - "Go form a country group". And he did.

Aw man...any chance for a re-up?
I have their self titled LP, ripped by me here if interested.

@ Camarillo: can you re-up theire self-titled LP?
Thanks.

This is the only record I have by them. Sorry zuiop.

Can u reupload! Please!