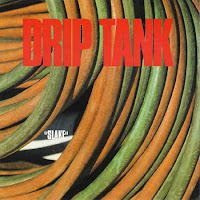 At some point during 1993, during my stint as a college DJ, a new word entered my vernacular - "Slake," and the album of the same name by San Diego's Drip Tank (formally Tom's Drip Tank) became part of my early twenty-something soundtrack. Bucking the trend of a plethora of co-ed alt-rawk groups of their era, Drip Tank were not cute and cuddly. In fact, when they bore their collective teeth on lacerating punk salvos like "Quencher" and "What the Hell," they were about as approachable as a live chainsaw blade within inches of your jugular vein. In regards to the those two searing album cuts, Exene Cervenka of L.A.'s famed X seemed to have rubbed off on mouthpiece/guitar slinger Julie D to no small extent. Elsewhere, Slake recalls some of Drip Tank's grimier, indie-punk contemporaries on the east coast, Pipe and Picasso Trigger (maybe more on this pair later, esp that first one, but I digress). Lotsa treble kickin' fun on this one folks.


A couple more quick things. Slake was mastered at an embarrassingly low volume, so I took it upon myself to boost the levels a few notches. Secondly, visitors to Wilfully Obscure may recall that earlier this year I shared two separate split singles the band did with fellow San Diego denizens aMINIATURE, that are still up for the taking. BTW, before disbanding, Drip Tank released a follow-up album, Scrawl. Speaking of which, if anyone in the band is reading this, I sent you $4 for that cassette you offered in the liner notes of Scrawl, and you never followed through on your end of the deal. A pity. At any rate, check out their Facebook page for more fun.

We had about 3 people send in for those bonus tapes. We spent some time putting together the bonus tape anyway (I can remember we hijacked the production studio at college radio station KSDT at UC San Diego) and it was almost done It had some stuff that I was really proud of and also a pretty sloppy but fun version of "Wurlitzer Jukebox" with Julie singing and me on bass, Abbie on guitar. Even if it was going out to three people I was still really excited to get this thing out!

Anyways ... the band sort of fell apart right after our second album came out and things were crazy and this is something that got lost in the shuffle (literally - I couldn't find the three letters that were sent to us.) I have still think about those 3 people who wrote in and never got anything - one sent a check we never cashed though so all they lost was the cost of a stamp. Another was a cashiers check that must of just expired and nobody got anything out of it (unless they kept their receipt and redeemed it themselves). And then someone sent cash. Not sure which one you were.

Please do send me your address and I will send you your $4.00 (adjusted for inflation of course!) It will help make me feel 1/3 better about something in I seriously worry about from time to time.

I keep a pretty low profile (surprised I am posting this and I am happy to stay "willfuly obscure") and went for years without touching a guitar but have been making forays recently. I have some ideas about stuff I want to do ... if only there was time! (Sigh) Who knows though, maybe I will even find that tape we were working, finish it off on make good on our part of the deal and finally get you your copy. (Don't hold your breath though!)

Thanks for listening (I haven't heard this stuff in years!)

Probably had the best time watching you guys play. Tons-o-fun. Found the Slake cd and put in my pod. Thanks for the memories.