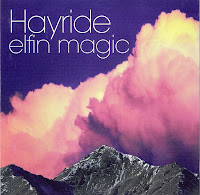 Wasn't quite sure what to think of this album upon it's release in 1995, so I chucked it back into the used bin... only to take a chance on Hayride again, thirteen years later at the bargain basement price of 25 cents (thank you FYE). It's moniker, elfin magic, is bound to conjure up images of those cuddly 'lil Keebler characters. That wholesome scenerio however is quite the antithesis of what this Georgia trio had in store. At it's most convincing, magic delivers crooked, ‘90s indie punk with some tuneful keepers like “Wormbringer” and the title track, but those are the fleeting exceptions, not the rule. As a whole, this affair is a pummeling, vicious, and sometimes sloppy melange of heaving power chords and rapidfire soloing, occasionally slipping into grunge, metal, and classic rock terrain. Local yocal David Barbe, fresh off his stint as bassist in Sugar, produced the album. Sidenote: Barbe helmed the quite excellent Mercyland during the late '80s, who we did a feature on way back when.