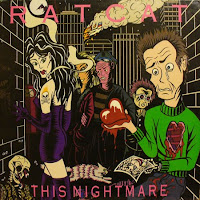 Unbeknownst to most people outside of the land down under, Ratcat were for a brief time a bona fide teen rock sensation. Propelled to the top of the Aussie pop charts by the infectious “That Ain’t Bad” in 1990, Ratcat were quickly anointed with “boy band” status by hordes of pubescent fans, mostly girls. The Sydney trio, helmed by Simon Day and featuring an invariably rotating cast of bassists and drummers, may have exuded the approachability of Hanson, but they packed the power-chord wallop of the Ramones (albeit slightly more restrained). This was particularly the case on their early independent releases for Waterfront Records, a self-titled ep in 1987, and their debut long player, 1989’s This Nightmare. Between the sixteen songs spanning these disks, I think you’ll conclude that if anything Ratcat were downright misanthropic, even macabre at times. In fact, the closest they come to being precious was in the guise of their rather unnecessary cover of “I Think We’re Alone Now,” a moment they may have well regretted somewhere down the line. 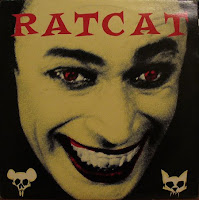 For my money, This Nightmare is Ratcat’s most consistent album. The aforementioned “That Ain’t Bad” however is perhaps their single greatest achievement, and it’s worth tracking down on their Tingles ep and/or Blind Love album. More albums would follow in the wake of Tingles, but as the groups fanbase waned, they called it a day during the mid-90s. Several reunions and one-off gigs ensued during the latter portion of the decade, and through 2006 by last count. The two records featured in this post were reissued on a now out of print CD compilation, Informer 80:629. For a more thorough account of Ratcat's and Simon Day's career, look no further that this excellent article on RetroUniverse.

Thank you very much for this record.

Any chance have you got the "Informer" compilation? Impossible to come across.

WOW! I can't believe it.

I have been looking for this for over 10 years.

I'd love to hear this. Any chance for a reupload of these long forgotten recordings? Cheers.

would you mind to reup "this nightmare"
thanks

The links have been updated (again).

Both links should be working now.

Links broken, any chance you could fix them?
Really hoping for their Blind Love release, cheers.

Could you please re-up the Lp from '89 only, as the EP link is working