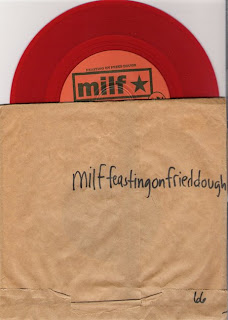 
In their time, they were compared to an incredibly diverse list of bands including (but certainly not limited to) Fugazi, Dag Nasty, Husker Du, Sonic Youth, Cheap Trick, The Beatles, The Posies, Sugar, Swervedriver, and on and on. milf's members were true lovers of music…music of all kinds, and that was reflected in the music they made.

For this installment, I'm treating you to a four-cut 7" ep, issued on Cash Cow Records in 1993, dubbed Feasting on Fried Dough, which offers some of their finest moments ever committed to tape, including "Sell Out" and "Face." Up next is their very first demo tape, New Skin, which likely had a run of 500 copies, if that. Though most of these five tracks were eschewed from their setlist by the time they got to their Fried Dough ep and ha ha bus!, the genius gears were clearly being set into motion. Capping this set off is "Up Yours," their humble contribution to a locally released Goo Goo Dolls tribute cassette. The tribute tape which I speak of came with a Goo Goo Dolls board game, but that's neither here nor there. In the liner notes regarding the song, milf note:

never heard of this band until this post, great stuff. can't wait to hear more!

thanx again for your continued efforts!!

Could you re-up this please? Thanks!

May we have a re-upload?