Splitting the Difference # 18 - The Ropers/The Tribbles - everyone has a secret daydream... 7" (1994, Brilliant/Giant Pool Balls) 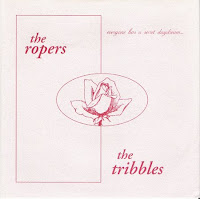 If Velocity Girl, Tsunami, and Unrest were the meat and potatoes of the mid-90s D.C./Arlington, VA indie circuit, The Ropers were the gravy. I was a sucker for their sweetly clanging chords and bittersweet harmonies from the second I heard their 1994 self-titled ep (technically a singles comp from what I recall) on Slumberland Records. Their contribution here, “Sweet Lord I Know,” is presumably from the same sessions as those crackling, early singles (which I may share in the future). Their lone full-length, All the Time is still available (on wax at least). A criminally overlooked beacon of their era.


I have no background info, nor was I able to find any online regarding the mysterious Tribbles. Since this single was a co-release Richmond, VA based Brilliant label and the German Giant Pool Balls imprint, they may indeed have been a Deutschland export, but sonically, these guys were indie Anglophiles all the way. My best guess is that they were from the States, so I’ll leave it at that, save for anyone that can respond with their exact locale. "Mercury" is a heady slice of flange-heavy dream-pop, while the accompanying "Liberty 5-3000" is as lucid and shimmering as a pristine lake sunrise.

I can't believe you posted this...thank you so much. I've missed this Ropers song for a long time. I couldn't agree with your comments more. Please post those early singles!

Hi. Could you please update this one sometime??? I'm looking for these Tribbles tracks. And there was another Tribbles song, an earlier one (booklet says 1991), on the Something Pretty Beautiful compilation. And they were from Richmond as we can see from their address in the booklet. Unfortunately not much info could be found on The Tribbles.

Just fixed the link. I really enjoy the Tribbles as well, but this is all I have by them. Sorry.