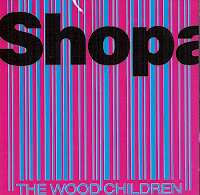 No biographic info to be found online regarding this utterly "lost" UK combo from the late '80s. So far as I can tell, Shopaholic was The Wood Children's second album, released a year after their debut, The God's Must Be Crazy. Gotta hand it to them for resisting the temptation to jump onto any of the convenient bandwagons of the period (Madchester, shoegazer, etc). Instead, I could envision these lads sipping from the same watering hole as the Family Cat and (early) Soup Dragons. Shopaholic can make for an slightly inconsistent listening experience, but recommendable overall, especially when they put their heads together on riveting, up-tempo nuggets like "Pollute My Heart" (also released as a single), "Heroin(e)," and "Golden Mine." This CD also tacks on four numbers from the Kids Global Village Idiot ep.

I'm really enjoying this band at the moment. Just bought a copy of Shopaholic and also purchased their single, Happens Everyday, a while ago (available on my blog). It's a shame they were forgotten about because they really are quite special!

Do you have anything else by them?

As of the moment, Shopaholic is all I have, but you can try looking for the rest of their catalog here: http://www1.gemm.com/c/search.pl?field=ARTIST&wild=wood+children&picklang=%2Findex.cgi%3Flang%3DEN%26clickflag%3D1%26

That's funny. I just tracked down the CD about a month ago as I couldn't find the album posted anywhere. I think "Mannipple" is my fave track.

This is an excellent album. I remmeber it from my Uni days back at the end of the 80's and seening them live.

In fcat just had all my old CD's shipped from the UK to New Zealand where i Live now. Must dig it out and have a listen.

I just wanted to say, it's nice to see someone write about this underappreciated band!

oh lordy its great to know some other people know of this band.I knew them (sort of) and got given the LP(I refused the CD as I didnt think it would catch on as a recording medium).I saw them live a few times and they were amazing.I still think the album sounds great, really cocky and energetic.If anyone knows
where to get the CD let me know, as the LP is quite scratchy now.

This is too cool!
My dad was one of the Wood Children!We live in Canada now and I showed this to him and he thought it was really neat to have a blog written about his band (although i'm not sure if he knows what a blog is!) I knew about his band but I never actually knew they had fans! They played in London and area four years ago.. I'l try to convince him to go back!
Thanks you guys!

Het Maddy,
is that Richard?I met him on the tube , he was rather lovely.I have the CD now and its fantastic, though I may be biased as its the soundtrack to my 19 yo life.Ah.Can you work on some more gigs?
Vicky

Great memories of The Wood Children, saw them at Northumria Uni in 1990 when Sweets For The Blind came out, loved them and their records remain treasured possessions, especially a signed 2nd hand copy of shopaholic I once picked up which had a poster, 3 photos from Lyon, set list and photocopies of melody maker reviews in it! Someone let a gem go there.

I was an in London in the fall of 1989 and travelled with the Wood Children to Nottingham for a gig. They played in the basement of a posh restaurant. They were tight.

Back in the day my band Surreal Madrid did a gig as support for the Woodchildren and Baby Snakes at the Bull & Gate in Camden. They were brilliant live. I'm now sorting out my record collection, came across the and wondered what ever happened to them ?

Saw them at Sheffield Poly in 1989. I was exposed to loads of bands as I worked as a DJ/Stage hand at the Poly but they stood out as a fantastic live band and ended up staying on our floor. Saw them again that tour in Manchester (Boardwalk?. Never got hold of the first album - must try and track it down.

Shopaholic was a great album. Good bunch of guys to. Saw them in the Underworld and some club in Bath, and showed Richard around Oxford once - I ended up swapping my guitar for his bass. Happy days.

From Los Angeles, went to the UK in 1989 as a graduation present from my parents. I remember being in a little record store in Liverpool, the fella behind the counter was playing Shopaholic and I immediately fell in love with it. I am still listening to it to this day. I wish I could find more....

"Epitaph for Miss World" remains one of my all time favorite songs.

Loved this band in the eighties, but desperate to download Sweets For The Blind - used to have the vinyl but misplaced it somewhere in the intervening 20 years. Moving to Australia probably didn't help. Anyone have a link?

Hello other one,
I have just got the vinyl Sweets for the Blind from eBay, and can make digital copy (courtesy of gizmo from Aldi, that reputable electronics store.).In Oz also(well,GoldCoast)
Can send on,
Vicky

Hi Vicky, that's mightily kind of you. My email is timdotmuiratgmail.com (the at is an ampersand but that first dot really is dot - sorry for the confusion but trying to avoid my address getting harvested). Many thanks, Tim.

Had my original copy of the cd shipped to me in new Zealand. And some c***t nicked my car with it in ! Makes ya wish you were an lllegal file sharer :-)

"Father, help me, please. I've got this tropical disease (that) I don't want to carry." The Wood Children have been big on my list of 'things which are just damn good' since John Peel put them on the radio 1980ish. Constantly listenable. I also saw them at a gig in the then Liverpool University Union. Fantastic. Unique.

does anyone know the WC track that strat something like "i used to love that boy but now he is a girl" ?

OK sorry to go off topic a bit but is that the Ball-y above I know?Chester House?This site is causing me no end of strangeness so it wouldnt surprise me.Get in touch you old slapper.

Mint album I've got the cd and vinyl,vinyl sounds best

Can remember buying the vinyl of Shopaholic from Birmingham HMV after it got a 4 star review from Q magazine, back when Q was a reliable guide. They were right too. They briefly threatened to become a sizeable indie band but never did, sadly. "There's a man in Timbuktu who's never heard of Bob Monkhouse".

Looking for this. Is a repost possible?

Hi Simon I think it is called Imaginary Trap and was on The Gods Must be Crazy. It carried on (I think)...’he tore his jeans and now he’s ripped apart my world...’

CP, Thank you for this. Sorry for delayed reply. I don't (rarely) use gmail. SPB

Was just looking for info about The Wood Children online and came across your blog. Off work sick today and listening to their first album ‘The Gods Must Be Crazy’ for the first time in 30 years! It sounds great. Wonder what happened to them...

Simon/CP - the line in ‘Imaginary Trap’ is as you remember, except ‘jeans’ is actually ‘genes’ as it’s about “a boy becoming a girl”.