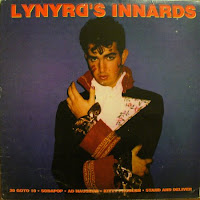 Thought it would be appropriate to follow up the Lynyrd's Black Flag tribute with another record they're on. This was a split 10" with their Cali buds Nation of Wenonah (actually the Wynona Riders slightly incognito). As was the case with their B/F renditions, Lynyrd's Innards don't brake for the speed bumps, pounding out furious, albeit fun, two-minute blasts of take-no-prisoners hardcore, including an unlikely cover of Adam Ant's "Stand and Deliver." Great album sleeve parody as well. 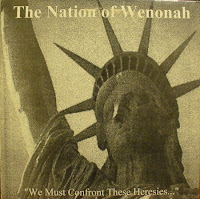 The Riders don't fare nearly as well on their half of the bargain. By the time they got around to this split 10," their sophisticated, uber-melodic brand of popcore took a backseat to raw, cranky aggro-punk, espousing none of the key ingredients that made their early singles and J.D. Salinger LP so flabbergastingly infectious and incisive. The best of the bunch here is their stab at Bikini Kill's "Rebel Girl.

Anyway, the LI/WR split came out in 1996, and it was the first time we ever released something in the same year it was recorded.

I've still got some of these in my closet, if anybody's interested in owning a copy and has more money than brains, drop me a line.

Hah! I'm in california at the moment, and I have a few copies in the basement too... but alas I will be in Brooklyn by the middle of the week, and those copies will stay here

Is there possibly a reup for this? I've been struggling to find it elsewhere.