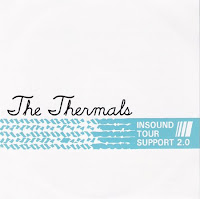 Yep, they're at again. Portland, OR's very own distorto-laden noiseniks, The Thermals are in the throes of a US tour and are currently winding through the Northeast in support of their recently released, not to mention downright sporty fourth album, Now We Can See. Word has it they're even more lacerating on stage than in studio, so seeing them tomorrow night is Buffalo is truly going to be a privilege.


Turns out that the fine merch lackeys at Insound issued an exclusive Thermals cd of live concert/radio recordings a few years ago as part of their ongoing Tour Support series to coincide with the band's 2006 The Body, The Blood, The Machine campaign. Sold at Thermals gigs (obviously) and through Insound.com, the coed trio in question enjoyed the distinction of having their Tour Support disk stretched to the album length mark - an anomaly for a series that typically capped it's releases around five songs. As all good things must come to an end, the cd saw a very limited run, and sold out by 2007. Submitted for your approval, here's the disk in it's entirety, and should come in especially handy for you vicarious types who can't make it to see the Thermals this time around.

I already added you to my list of blogs.
Please visit: http://janglepopboutique.blogspot.com/
Hope will exchange links.

I'm DJ at the OP tonight if you're still out after the show. Stop by!

Nice up man. Had this for a bit already and it's a good download. A shame the new album's a bit repetitive IMO.