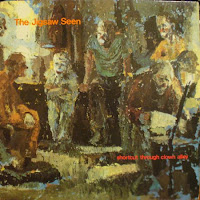 
Incidentally, The Jigsaw Seen would bring forth their signature song in 1991, in the shape of "My Name is Tom," featured on the ep of the same name that was thoughtfully reissued in 2006. The band have been recording/performing intermittently since their late '80s inception, and their website linked above is well worth exploring, if only for plundering the MP3s of a BBC session.
01. Pillar of Salt
02. Can Andy Come Out and Play?
03. Where You're Goin'
04. Jesus of Hollywood
05. These Are the Days
06. Jim is the Devil
07. Sebastian Kane
08. Under Par
09. Cordially Invited - December
10. Jezebel
Hear
Posted by spavid at 7:34 PM