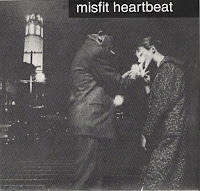 Why Misfit Heartbeat? Because we're all misfits at heart. This was a double 7" compilation that came out in either 1993 or '94, as a split release between two San Fran area labels, Take a Day and Iteration. It functions as an utterly concise, as well as convincing snapshot of California's indie-punk scene of the era, starring Pinhead Gunpowder (who's lineup included Billie Joe of Green Day renown, and Crimpshrine's Aaron Cometbus) as the most established and recognizable participants here. Their contribution, "I Wanna" also turned up on their crucial Jump Salty singles compilation (incidentally, no home should be without this record).


Davis, CA's finest sons, Playground offer up a stunning slice of melodicore punk, "Brighter Days," a la Moving Targets. More by them to come on Wilfully Obscure. Quickly following this up are the Wynona Riders with their spin on the Kim Wilde classic "Kids in America." This is a different version than that which appeared on the Wynona's J.D. Salinger LP (also an album everyone needs). Other highlights include aggro pop-punks Rhythm Collision, the quasi-riot grrrl assault of Bitchcraft, and the strangely dynamic angst of Pot Valiant.

The powers that be have asked me to remove the link.  My apologies.
Posted by spavid at 11:44 AM

any chance you re-up this comp?