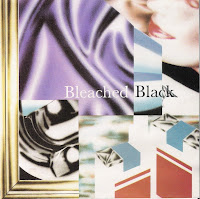 I originally learned of Bleached Black via the excellent and sadly departed Feeling Kinda Froggy blog. If memory serves me correctly, the little write-up that went along with it dropped a comparison to Husker Du. That wasn't completely off the mark, but this Connecticut trio didn't quite perform at the whiplash tempos Bob Mould and Co. were wont to indulge in. Bleached Black was released in 1987 on a high profile indie label of the era, Relativity Records, ostensibly sans any significant promotion (after all, I just learned of them 22 years after the fact). Nevertheless, B/B had a simple, but satisfying penchant for slightly left-of-center, indie guitar rock, wielding a pitch-perfect balance of jangle and durable power chords. Trouser Press had these kind words to say:


With crisp sound (production by Lou Giordano) and abundant tunefulness, Bleached Black is an excellent full-length debut. "I Was in Your Life," "Chelsea" and "Circuitry Spiders" typify the band's characteristic mix of energetic drive, alluring harmony vocals and modulated guitar roar. Bleached Black are honing a viable audio personality and seem able to write well enough to make even better records than this.


All tracks now available on Bleached Black's A Wrist Slashing Retrospective, which can be purchased digitally from Amazon Downloads and iTunes.
Posted by spavid at 8:51 PM

I came upon your blog about a year ago and have been hooked ever since. I think the thing i like best is that i am happy to see that i am not the only person that likes the records you post. Come'on Bleached Black! This is a great, great record! I have the slashing LP but it might take some time for me to get it burnt from vinyl to cd to mp3 transfer but i will get it to you. Thanks again!

Another record from my "to do" pile that I don't have to worry about anymore!

I just bought this LP at Amoeba (for $3)after looking for it for years. one of CT's earlier indie-rock (before there was indie rock)successes. Steve Deal and Chopper continued making great Big Star influenced rock for years after.

ummmm i have BOXES of "Wrist-Slashing Romance" in my basement...also i have an unreleased 3rd album produced by lou giordano at fort apache that needs a release...feel free to ask for WRS just pay me for postage, etc. SD

I used to LOVE this record. I have wrist slashing as well.. but it seems you are now all set.

I've been looking forever for a record by a band called (I think) The Disturbed from CT. They had a song called you're so beautiful but you're such a slut. WERS used to play it about the same time they played this. I owned the record at one point, but gave it away.

Wow! A stunning flashback to the "once upon a time" world of college radio! Unfortunately, my copy of this was stolen from said college radio station, so I'm looking forward to this rip not skipping in the middle of "WSR"! Thanks for posting a great album... and let's hope Stephen comes through with that lost 3rd album!

Loved this record, though I no longer have it. Don't know where it is. I have a suspicion that I saw BB. But I saw too many bands to really remember. If they played, Madison, WI - esp. O'Cayz Corral, then I saw them.

I'd love a copy of the WSR album, too! My email is my blogger name plus gmail.com if Mr. Steve would like to contact me so I can send him money.

well afyter checking my basement i've discovered that the "WSR" EP's were actually CHOPPER "4PLAY" EP's, but i DO have the WSR EP burned to CD, so i can send people those if they wanna send me an inquiry to ssmuth924@optonline.net ....

Ok so I know someone has their mitts on the Writst Slashing Romance and the WSR has anyone ripped these?

i have WSR transferred to CD and the CD (with 2 digital dropouts---the way the cd's actually came out!) of the BB album. can burn and send to anyone that's willing to pay postage. oh yeah check out "It happened but nobody noticed..." the documentary featuring BB:
http://www.facebook.com/pages/It-Happened-But-Nobody-Noticed/66799137042
regards, Steve Deal

OK sorry about my earlier post being all scrambled. Re-reading I realized I made an editing error.

It is funny that you mentioned the digital dropouts. When I was a senior in high school one of the bands in our high school somehow got a gig to open up for Bleached Black in Nashville. About 10 of us, fake ID's in tow, headed out to Exit In. To our shock some of the faculty from our Catholic high school found out about the gig and showed up! They just ignored us and let us do our thing.

Anyway little did we know that we were in for a very memorable night. Bleached Black was incredible. We all we absolutely blown away. We ran out and bought the CDs at which time the topic of conversation became "does your Ecosong drop out?... anyone got the LP? does it do that too?" I would have been sooooooo pissed if I was in the band. Anyway it did not stop us all from becoming huge fans.

Steve, how can we contact you to get the EP? I'd actually be happy with some MP3s or WMAs if you can post those

yeah well we found out how much of a priority we were back then! but really i think we bought the cd's without even owning players yet...we played the vinyl and NEVER the cassette. if you want a copy of WSR..just send me 2 bucks to my paypal (for postage) and i can get it to you ASAP... ssmuth924@optonline.net is my paypal addy...make sure you get me your address! steve

Hey guys, just a post to let you know my solo CD is out and available finally---it's my first self-release since WSR, and I think it's one of my best. Anyone wanna get one, contact me...also anyone still need a CD of Wrist Slashing Romance? Steve

I have still have an Original tape of this album!
I was looking for lyrics and stumbled onto your blog.
It'll be great to listen to it again! Thanks for the up!

A friend of mine had the BB album back in college, when it was released. Searched for it for years and found the CD in the closeout bin at a record store. I was psyched. I still listen to it. Yup, it had those dropouts. I've thought about editing the track in SoundStudio to fix them, but I haven't gotten around to it. They might be seared into my brain by now. Glad to see that others appreciate the album too.

Wow... I had the cassette (and maybe still so) and loved this album. So did my mom! One of those great albums of 1987 (there were a few!)
Just looking at the song titles, the melodies come back into my brain. Gonna have to find that.
Glad to see you're still going on, Steve!

Just an update...the BLEACHED BLACK "Wrist Slashing Romance" EP plus the unreleased 2nd full length album also produced by Lou Giordano at Fort Apache and 4 bonus tracks will be getting a CD release within the next few months via ZERO HOUR RECORDS in Australia. They are also doing the Chopper back catalog...
http://www.zerohourrecords.com.au/

I'm about to reissue this with bonus tracks.. www.zerohourrecords.com.au

I just dug out the 1987 Bleached Black album (on CD) and decided to Google them and stumbled upon this conversation. I'm actually from CT, knew some of the band members & went to some of their shows back in the day. Last one was in a little club in the East Village NYC around the time the BB album was released. I was probably still underage back then. Another up and coming CT band around that time was Miracle Legion. I moved away in 1989 and lost touch with most people from that circle of friends, but I sometimes wonder where they are today. Glad to know the music & the memories are still alive!

any chance you could re-up, please? thanks!!!

Hey folks
This is Shaun the drummer from Bleached Black.. Sadly Stevo / Steven Deal passed away, Greg is still writing music and living in CT. I Now live in Nashville and just semi retired from the music business. I am a sound engineer .I am interested in connecting with Trenton that posted to this thread, his profile is private so I am unable to message him. I worked at the Exit in for 3 years before I realized I had played at the club with Bleached Black 20 years prior... Funny how things come full circle. I have been posting some Videos from the Grotto in New Haven on Bleached Black's Facebook page ... Bleached Black. go check them out. You can connect with me there if you want. That era of music from back then was Great... College radio, tons of DYI bands, when I speak to bands about Touring before the internet, cell phones and GPS they look at me dumbfounded.! Now technology has changed everything about music, some for the better some not so much. Keep you inner music fan Alive and Be good.