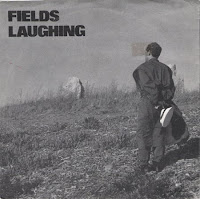 Fields Laughing, a co-ed trio from Berkeley, CA from way back when were yet another pleasant eBay discovery for yours truly. Despite their arcana, there's actually a Fields Laughing Myspace page with a great bio (some of which I've included below). This upload may seem redundant, given that the entirety of this ep is available for streaming on their Myspace site, if it weren't for the fact that the fidelity of my copy is noticeably better, with at least a few less pops. Green On Red seemed to have significant sway with Fields Laughing, who are endowed with a temperment recalling other rootsy, left-of-the-dial types, like Austin contemporaries Glass Eye. Members went onto other bands including Too Much Joy, and Pop Art, the latter also on Stonegarden Records. Here are some more pertinent details from their bio:


Fields Laughing was formed in 1984 in Berkeley, California, by several college students attending U.C. Berkeley, including Steven Weisburd, Jay Blumenfield, and Nancy Hess. After a brief period with singer Dave Leavitt from Athens, Georgia -- in which the band had a gentler Americana/R.E.M. feel -- Fields Laughing reformulated with guitarist/singer Joel Brandwein and reemerged with a rougher and harder sound. In this formulation, Fields Laughing became a very active bay-area alternative rock band in 1985 and 1986, getting substantial college radio airplay in the bay area (KUSF and KALX) and elsewhere. While headlining local clubs on their own, Fields Laughing also played many opening slots for a number of the leading bands of the era (e.g., 10,000 Maniacs) as well as other local successful acts (e.g., Chris Isaac).
A1. Almost Never
A2. Curtain
B. New Falling
https://www120.zippyshare.com/v/whmWmo0J/file.html
Posted by spavid at 5:36 PM

it would be great if you re-up this single.