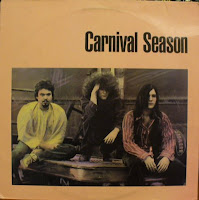 Few bands have sparked the kind of visceral response for me as Birmingham, AL’s Carnival Season did – about 20 years after the fact I might add, but this is sincerely a case of better late than never. I discovered Carnival Season by way of their long out-of-print Waiting For No One LP at Power Pop Criminals. It’s still available for download, and is a must if this triple-shot moves you in the least. Imagine if some unseen force melded the strongest facets of Tommy Keene and Tim-era Replacements, with the thrust of Husker Du for good measure, and you’ll have a keen understanding of where this trio was coming from. Chords and hooks to die for, that will have you begging not to be sent to heaven any time soon. “Please Don’t Send Me to Heaven” also appeared in slightly remixed form on Waiting, while the other two tracks are exclusive to this release.

A 2007 reunion show can be downloaded here. There has been talk of a Carnival Season reissue on Arena Rock Recording Co, but firm details have yet to surface. Would really love to see it happen, as neither of their releases have made it to CD yet. Guitarist Tim Boykin went on to helm to other power poppin’ bands of note, the Shame Idols and The Lolas.
01. Please Don’t Send Me to Heaven
02. Wondering About the Knife
03. Manifold Man
Update 5/17/10: Hey folks, taking down the link for this one, as it and the Carnival Season Waiting For No One LP are on the verge of being reissued on Arena Rock, as I prefaced above when I originally wrote this post. Look for the reissue this summer!
Posted by spavid at 7:22 PM

Brad Quinn played quite a bit with Tommy Keene as well.

Oh, my god! I can't wait to hear this. I had the same reaction to hearing their LP on Power Pop Criminals.

By the way, Lolas are great!

Years ago I sent Jeremy Morris copies of all the Carnival Season releases when the Lolas were on Jam. He asked Tim about a reissue or compilation but there was no interest then.

Their 1st release in 1985 was a 45 EP under the name Karnival Season. Uploaded here for your listening pleasure:

Very cool. Thanks for the link!

Thanks for posting the tracks

Carnival Season reissue is underway through the Arena Rock Recording Co. It will include all the records and some other flotsam and Jetsam.

Brad, that is awesome news. I'll relay the news to The Audities List, as even though Tim is a subscriber he never posts.

Everyone else: the Arena reissue link: