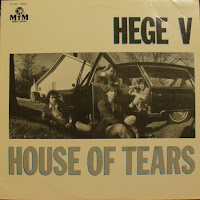 Hege V’s House of Tears was something of an anomaly, as far as Mitch Easter productions go that is. If it’s sweet, chiming guitars you hope to encounter, stick to your REM and Windbreakers disks (though Tears leans vaguely in the direction of Dreams So Real and the like). Unabashedly twangy, this long departed Chapel Hill’s, NV troupe bled “Americana” all the live long day, a la The BoDeans, Del Fuegos, and to a much lesser extent, the Georgia Satellites, but that’s a bit of a stretch. They weren’t shy to brandish the strut and swagger of a good old fashioned bar band either (check out my Classic Ruins post for the living, breathing definition thereof). Here’s some background info from their Myspace page:


HEGE V (pronounced: Hegg ee / Vee) the man & the Band pioneered 'Alt.Country / Americana music', introducing this yet un-named genre to Album Rock, College and Country Radio in 1987/88.They were the FIRST 'Alt.Country' artists to blaze the trail out of the Southeastern U.S. of A., later followed by the Backsliders, Whiskeytown and others.

Hege's "rural rock" took-off with the release of HOUSE OF TEARS, produced by Mitch Easter (of REM fame) at his legendary Drive-In Studio in Winston-Salem, NC. The band toured America in a beat-up '65 Cadillac hearse, the "Hearse Of Tears", (10,000 miles through 21 states in 27 days) playing the honky-tonks from Austin to Boston while Hege's self-directed music video, "Burial Ground Of The Broken Hearted", aired on MTV. HOUSE OF TEARS wound-up alongside U2, Bruce Springsteen and REM on many 'BEST OF 1987' lists, including THE BOSTON GLOBE's where Hege V was declared "A FUTURE SOUTHERN SUPERSTAR"!

How about that? Me thinks they’re taking a little too much credit, but anyway… This was ripped from crackly vinyl. CD copies exist of House of Tears, but at this stage in the game, they're pretty pricey.
01. House of Tears
02. Silent Stars
03. Matter of Fact
04. Burial Ground of the Broken Hearted
05. Gone, Gone, Gone
06. Hard Way (You'll Learn the)
07. My Decline
08. She Says
09. Grass Grows Greener
10. Ghost Town
11. She Ain't Comin' (Back no More)

wow. never thought i see anything by him again. i've seen one video back in 86-87 on the canadian music channel. thank you very much

I lived in Raleigh when this record came out. I think it still stands up pretty good, and given its place of origin, it does telegraph what's to come later in the No Depression movement.

thanks for this album. I've got this vinyl in my room. :)

could you please re-up this one?

Any chance of a re-up on this please ?