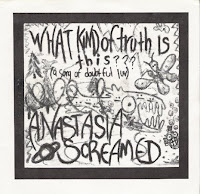 When I posted Anastasia's Screamed's Laughing Down the Limehouse CD a couple weeks ago, someone mentioned how much they loved an A/S tune called "What Kind of Truth Is This?" I have an equal admiration for the song as well. It initially appeared on their debut single, and later as a b-side to the "Samantha Black" 12" single. I have both, so after determining the 7" version was a lot less crackly than the 12," I opted to go with the single for this upload. Per my previous ruminations on Anastasia Screamed:


Mouthpiece/focal point Chick Graning possess the same worn-in, raspy timbre Peter Searcy of Squirrel Bait became legendary for. Though his guttural croon is nearly impossible to forget, Graning's cohorts are a much looser, ramshackle bunch, flailing about like so many flannel-flyers from points due Northwest...Glorious feedback squalls, not to mention extra enthusiastic percussion, put them right up there with Dino Jr at times.


Quit simply, "What Kind of Truth Is This?" is an out-and-out killer. Glorious melodic indie-punk, coming off as a second cousin of sorts to the Replacements "Bastards of Young," and every iota as vital I might add. Unfortunately, the mellower flipside, "Gravity" brandishes it's fair share of surface noise. I'm also including here A/S's Electric Liz ep, a record I don't own a physical copy of, but found a great rip of on Soulseek awhile back. It features five utterly cathartic cuts, terrifically conveyed by Graning's anguished, golden throat. This guy's got more emo in his pinky than the entire Fueled By Ramen roster combined.

I relly dug the Electric Liz ep it seems to be their most cohesive and rockin' (I might add) material.

Anastasia Screamed are reuniting to headline a show at the Brighton music hall in boston September 28th, 2014.
Tickets still available!!

The link has been updated,

I love the b-side: Gravity.