Ok, here's the second round, and it's even better than the first. Tracks 1-6 comprised milf's second publically released demo tape, why people suck, containing early incarnations of four songs ("bad idea," "hate me," "angst & daisies" and "me") that would be rerecorded for their viscerally stunning proper debut, ha ha bus! on Big Deal Records in '94. By this point, milf's melodic prowess had developed significantly, and were drawing larger crowds, often sharing bills with Tugboat Annie (the topic of a previously explored split 7"). 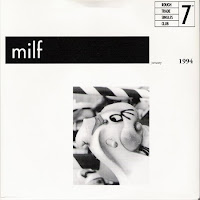 The next two cuts, "no name" and "2," were released on a single as part of Rough Trade Records singles of the month club from the early to mid '90s. "2" appears as a different version than the one on why people suck. These tracks were also available on a Rough Trade singles of the month compilation CD, which is the source I used to rip them from. "Thom," later retooled for the second milf album, antidope, turned up on a 7" comp, The More You Eat the Better You Are, Vol One - Music From Ithaca, NY. All well and good I suppose, but milf were actually based out of Lockport, NY (Buffalo/Niagara Falls area), which was situated a good 150 miles or so from Ithaca. Maybe I'll upload the whole thing at some point. Finally, we have "Apples" another future antidope venture, cut live to air at the studios of WBNY at Buffalo State College. Click the WBNY link to stream the broadcast (if you know what's good for you that is).
why people suck tape (1992)
01. bad idea
02. 2
03. hate me
04. angst & daisies
05. me
06. bullshit
Rough Trade Records single of the month, January 1994
07. no name
08. 2
from The More You Eat the Better You Are, Vol One 7" comp (Cash Cow, 1994)
09. thom
from Alive on Air, WBNY 91.3 comp cd
10. apples
https://www106.zippyshare.com/v/NvQsHiQH/file.html
Posted by spavid at 7:55 PM

hopeful request - this seems like something you might have. Small - Makes Me High 7" with one of my favorite songs of all time "Somebody Owes Me Money" I am going to make this request at a few other blogs so if you see it repeated don't worry, I am not a bot. Thanks!

Got it! I'll try to get it up later this week, as well as some other vinyl b-sides.

Could you re-up this please? Thanks!

May we have a re-upload?

On the Internet, the kindness of strangers really pays off. Stay obscure, you kindly person.