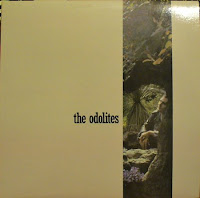 Before going any further, I owe a big belated thanks to the person who responded to my previous Odolites post, who informed of an album I had no idea existed - this one! That much appreciated info prompted me to track down this album, and wouldn't ya know, I was actually able to locate it in a short amount of time (although it isn't likely that there are too many copies of these floating around, as was the case with everything else they committed to vinyl...I think a reissue is in order)! The Odolites were a mid-80s indie band from Tasmania (but originally Melbourne) Australia, specializing in Paisley Underground-inflected guitar pop, not unlike Rain Parade and Translator. To give you a better background on the band, below is the text from the post I mentioned above:


The Odolites were a 4 piece guitar band who formed in the mid 80's in the North of Tasmania (Australia). At the time, groups in Tasmania playing original music were few and far between, especially those who championed bright, guitar pop. The Odolites wrote and recorded around 10 tunes, 5 of which became the EP, Persistence of Memory(Rampant Records). The band relocated to Melbourne, and became part of a vibrant, ever growing independent scene. They received rave reviews for their Persistence of Memory EP, and the follow up single, Chimes. A video clip for this song exists. They released another single, Kathleen's Tantrum followed by a full-length album, Face Down in the Violets (Rampant Records). They disbanded in 1988. Members joined 3 other bands of note - Tender Engines, The Somerfields and The Fish John West Reject.


My original Odolites post was for the group's "Chimes" 7," and Persistence of Memory ep, which are still available for download from the hyperlink in the first paragraph. Face Down in the Violets didn't impress me as viscerally as the two records that preceded it, but is nonetheless thoroughly recommendable if you like what I shared by them last year. Sorry about the glare in my photo of the album sleeve.
01. Kathleens Tantrum
02. Hope (Beneath the Surface)
03. Just Another Day
04. Closing Down
05. Towards the Sun
06. Perfect
07. I'll Show You Why
08. No Bed of Roses
09. Wait til the Day Comes
10. Threshold
https://www90.zippyshare.com/v/lMEJdINV/file.html
Posted by spavid at 2:42 PM

I'm very pleased you were able to locate Face Down in The Violets. I can thoroughly recommend the works of each of the other bands mentioned. Tender Engines was formed by Harvey Saward, lead singer and songwriter with The Odolites. He formed this band with Andrew Viney, bass player and songwriter with The Fish John West Reject. Tender Engines wrote simple, straightforward appealing pop tunes. They released a number of singles plus an ep on the Summershine label.
Gary Aspinall, vocalist and bass player formed The Somerfields, and they released 2 wonderful ep's of intricate, well crafted pop.
Graham Rankin, drummer with The Odolites joined another ex-Tasmanian band, The Fish John West Reject. Their music was decribed by many as 'acoustic pop thrashabilly' - a fusion of guitar pop and early American folk...imagine The Housemartins meets Woody Guthrie. They had a variety of lineup changes and released 2 albums and a few singles. Members of this band are now together as The Dunaways, with albums released on the Croxton Records label.

Here's an excellent recent interview with Harvey Saward of The Odolites. He speaks about the early influences, the early history of the band, what the members are up to now...great stuff!

Hey Dunnyman. Been lagging once again, but thanks again for your imput and vital info. Really appreciate it!