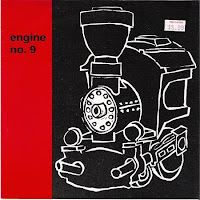 As promised, here's another installment in the Fudge legacy series. Turns out that prior to getting all woozy in Fudge, the band's nuclei of frontmen Tony Ammendolia & David Jones had their antecedents in a group called Engine No. 9, who's recorded output involved a mere 7" single. Gee, thanks a lot guys. If you would have been a little more generous I wouldn't be lamenting the fact there were no more songs cut from the same flabbergasting fabric that bore "Sleep," and "Waterfall," two modest, but deeply affecting mid-fi downer pop classics for the ages. 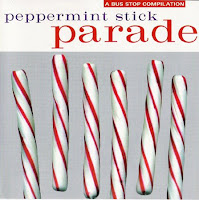 While I've scanned the sleeve for the single to your right (that Pier Platters tag ain't getting peeled off for nothin'), both tracks also appeared on Bus Stop Record's Peppermint Stick Parade compilation, which I've posted in it's entirety (that means the whole thing). Since you've been gracious enough to come for Engine no. 9, stay for jangle-pop keepers by the equally impressive Bag-O-Shells and St. Christopher. And if that weren't enough, there's also some vintage Velvet Crush action going on here too, and believe it or not, the pre-VC Springfields (Rick Menck) and a solo cut from the Crush's other prime mover, Paul Chastain. Should you crave more of the Menck/Chastain axis, proceed to this pertinent post from last year.

01-The Stupid Cupids - Big Blue Bus
02-Bag-O-Shells - Almost Home
03-Honeybunch - Warts and All
04-The Mayfields - Deeper Than the Ocean
05-Engine No. 9 - Waterfall
06-St. Christopher - Even the Sky Seems Blue
07-The Springfields - Sunflower
08-The Sneetches - Flying on the Ground
09-Bag-O-Shells - Whatever Happened to My Life?
10-Engine No. 9 - Sleep
11-Honeybunch - Hey Blue Sky!
12-The Mayfields - Feels Like Yesterday
13-St. Christopher - Our Secret
14-The Caroline Know - Orphaned Too
15-Paulie Chastain - Raining All Day
16-Velvet Crush - Circling the Sun

Hey, forgot those songs were on here. Losing track of everything!