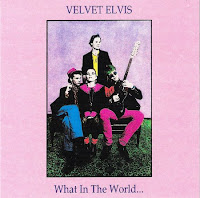 Lexington, KY's Velvet Elvis were one of a bazillion college-radio bands in the '80s to record for local record labels despite brandishing the quality befitting of a national, or for that matter international audience. Think "indie," "New South," dB's, Let's Active (who's Mitch Easter contributes on a track here), and even a little Tom Petty-esque jangle.

In actuality, Velvet Elvis did have a shot on the national stage, via a self-titled album in 1988 on Enigma Records, which did precious little to boost their notoriety. This assumedly very limited cd-r compilation rounds up their superb 1985 ep, Fun & Trouble, and the What in the World album that followed a year later, as well as eight bonus cuts tracked between 1987-89, some produced by Mr. Easter. Both of the main recordings were released on Hit-a-Note-Records, and the CD was put out in conjunction with Better Days Records. A review can be read here.
Here's what Allmusic has to say:
Although part of the fertile indie rock scene centered around Lexington, KY, during the late '80s, Velvet Elvis focused more on country- and pop-oriented rock than their experimentalist contemporaries, recording an EP and one album for the Hit a Note label before signing a contract with Enigma in 1987. The quartet began recording with producer Mitch Easter (R.E.M., Let's Active) and released a self-titled album in 1988.
What in the World
01. Ambition
02. What in the World
03. Too Much of Anything
04. Back Where I Belong
05. Making Plans (With a Married Man)
06. Back It Up
07. All the Girls in Town
08. Nowhere
09. Something Happened Today
10. Out of My Hands
Fun & Trouble ep
11. Still Another Reason
12. Second Best
13. Patron of the Arts
etc...
14. If You Say It's So
15. Hard to Hold
16. Guilty
17. Suitcase Song
18. Whatever's On Our Minds
19. Little Town Jerk
20. Which Way Now
21. Try!

Oh my GOD! You just totally made my day. I used to play "What In The World" on my college radio show all the time and have all but forgotten about Velvet Elvis. Thank you. I can't wait to hear this.

Now if you can find The Children so I can hear "We Belong Together" again I can be in perpetual late 80's/early 90's bliss. :)

Awesome! I was a big fan of the Enigma album produced by Mitch Easter back in the day, and always hoped to hear more from them. The Wednesday Week album produced by Don Dixon and released by Enigma around the same time was also great. I believe that was reissued last year.

Thank you so much for posting this. I grew up in Lexington and used to play Velvet Elvis on my radio show on WRFL. I have a copy of the locally-recorded What In The World LP...now I just need to track down the Enigma Records album on CD.

So awesome to find this! Thanks for posting!

WOW! They played at my high school prom in 1986. Love it! My son just went to his prom and I was singing Velvet Elvis' praises.

I have a ton more demos from VE including a few more with Mitch. Sadly, they're all just on cassette right now.

Would you be willing/able to re-uo this one? I've been seeking those tracks from '85 and you're the closest I've come. Thanks.