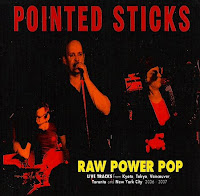 I came across this CD on Ebay last year, and it's unclear (at least to me) whether this is a band sanctioned release. As any self-respecting Pointed Sticks fan already knows, the incendiary Vancouver punk/power-pop band that was active in the late '70s/early '80s reunited in 2006 for several live shows, a single, and as I've recently learned myself, an upcoming album (only their second)! I've posted music from the Pointed Sticks earlier on these pages.


Raw Power Pop contains 18 field recordings spread over the course of five reunion gigs in Japan, Canada, and NYC between 2006-07. A great memento to the majority of us that were unable to attend these shows. The band's studio back catalog has recently been made available on CD from Sudden Death Records. For more background info, check out my aforementioned P/S post, and their Myspace page.
01. intro
02. Marching Song
03. Lies
04. I'm Numb
05. When She's Alone She Cries
06. What Do You Want Me to Do?
07. Somebody's Mom
08. Apologies
09. All I Could Take
10. Way You Do
11. How Could You
12. All That Matters
13. True Love
14. The Real Thing
15. The Witch
16. Part of the Noise
17. Out of Luck
18. It Hurts to Be In Love

Jonas, your friend in Sweden

Raw Power Pop is indeed a band sanctioned release,in fact,we did it ourselves!!And yes it's true,we do have a new album recorded and scheduled for release in June.Check out our MySpace page(there are 2,one is a fan site),or thepointedsticks.com for info.We kind of surprised ourselves,we did the first gigs as a lark,never expecting to write new songs and record,but we did the "My Japanese Fan" single (on Sudden Death")and it was so much fun that we decided to give it a try.So,13 new songs later,we have an album.And it's really good.But the fans will be the judge,as always.

Well, I'm not sure whick "Stick" just chimed in, but thanks! First heard P/S on the Bomp Roots of Powerpop! compilation, and instantly found religion. I even attended your Toronto gig in 2007 at the Horseshoe. Very much a pleasure to hear from you.

Any chance to re-upload this one? Thanks in advance!