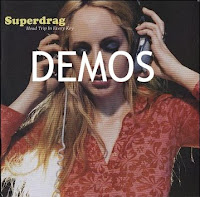 While the world (or at least I) awaits Superdrag's "reunion" album, Industry Giants, I thought I'd commit to cyberspace this collection of demos recorded in 1997 at the fabled Bearsville Studios in upstate New York for their second LP, Head Trip in Every Key. While they never recorded a less than stellar album or ep, Head Trip... found Superdrag at their creative apex, building on the foundation of their riveting debut, Regretfully Yours.


Naturally, most of these songs were fully realized on the record in question, but I believe at least five didn't make the cut ("Here We Come," "She Says," and "My Day (Will Come)") found their way onto the Superdrag outtakes collection Changin' Tires On The Road To Ruin almost ten years later. Enjoy.

You can count me as another who is looking forward to hearing a Superdrag reunion album. Great band.

I don't think I've heard a good 90% of these demos, so thanks a lot! I, too, am anxiously waiting the arrival of Industry Giants.

dude, this made my day. I've been looking for songs like Bristol Girls, Head Trip.... I'm freaking out at work right now. THANK YOU!!!

by the way, I did this interview with John Davis that got into detail about his demos a few years back

Possible to reup? Thank you.